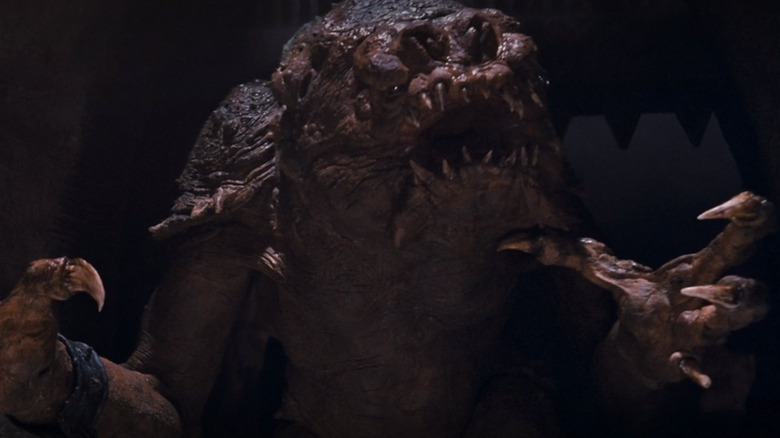 An overreliance on CGI is a pitfall faced by many sci-fi movies. Even “Star Wars,” with all its revolutionary effects, has found itself criticized for excessively using the technology. Like when George Lucas decided to unnecessarily update his original trilogy with a bunch of gaudy-looking computer generated imagery. Or when the prequels emerged looking far too polished, especially when it came to space battles and lightsaber duels, despite being canonically set further in the past than the original trilogy. What’s ironic is that Lucas and his visual effects house Industrial Light & Magic helped transform what was perceived to be possible with special effects when “A New Hope” was made with only practical effects like miniatures and puppets.

It’s hard to lay all the blame on Lucas for succumbing to the temptation of such special effects wizardry. Audiences in the last few decades have been just as dazzled and distracted to the point that some turn up their nose at the very effects used in “A New Hope.” I remember an acquaintance once telling me they couldn’t stand to watch the “old” movies in the “Star Wars” saga because it didn’t look “real.” Yet since the end of the sequel trilogy, it appears practical effects are making a comeback, driven in no small part by the many Disney+ shows that are helping to both expand and fill the gaps in the “Star Wars” universe.

The Necessity Of The Original Trilogy’s Practical Effects 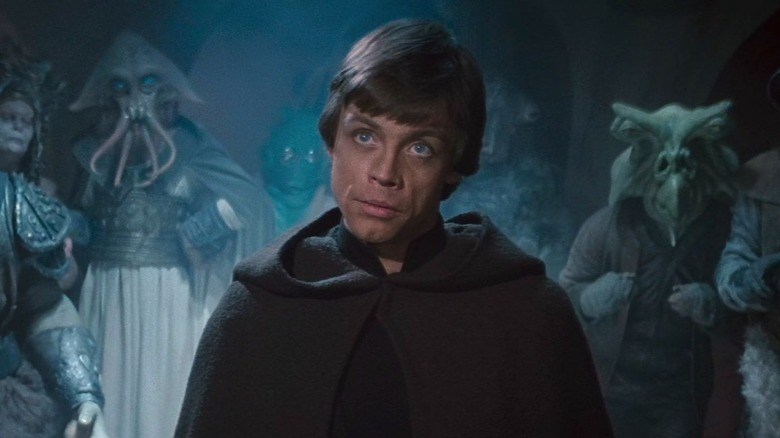 Of the entire original trilogy, one of the reasons “Return of the Jedi” stands out is the sheer scale with which practical effects were used. But as Muren told StarWars.com back in 2013, a lot of what we see onscreen is born as much out of ingenuity as it was necessity:

“Well, there was nothing really to compare it to. There were no examples out there of what a 100 percent real creature might look like. So people were prepared for things that didn’t look a hundred percent real, and you can kind of fall in love with them. It was fine if 90 percent of the creatures in it had two arms and two legs and a head, which is nothing that goes on biologically in any place in the universe. Things evolve differently. But that’s the way people are and that’s the way we had to propagate it.”

As a result, the spectacle of Jabba’s Palace resulted from what Muren called the “constraints at that time of what the technology could do.” To many a “Star Wars” fan, the costumes and puppets that are used to bring to life the many alien species that populate the film hold up decades later. From Yoda to everyone’s favorite droids C-3PO and R2-D2, no one questions why they all conveniently have the physiology that would allow people to play them. Instead they just allow themselves to be whisked away in the fantastical appearance of it all. That makes us wonder: Has CGI impaired audience’s ability to suspend belief by making expectations of realism too narrow?

Finding Advantages In The Limitations Of Practical Effects 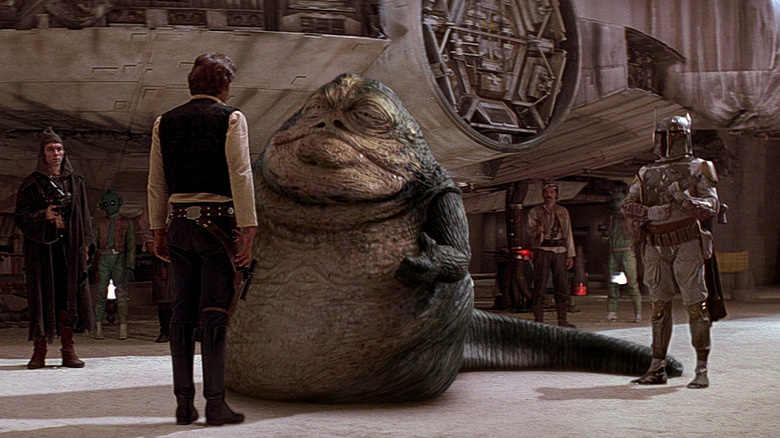 Muren highlights one infamous alien in particular: Jabba the Hutt. Manifesting a creature like that for the film might’ve sounded difficult on paper. But as Muren explained plenty of perceived limitations actually revealed hidden advantages:

Like the curiously large amount of bipedal aliens in “Return of the Jedi,” the size of Jabba meant they could get away with not having to show him move and no one would question it. That explains some of the ire levied at Lucas when he added an animated version of the giant slug into “A New Hope,” only to allow audiences see him move a few feet. Plenty of the annoyance was owed to the fact that the CGI addition looked significantly worse than the practical puppet created decades before. For his part, Muren says that it’s all about convincing younger audiences when it comes to special effects. “I think if it’s done right, people are going to like it. What doesn’t work is when something looks fake,” he explained. “That just dismisses everything as far as I’m concerned.” 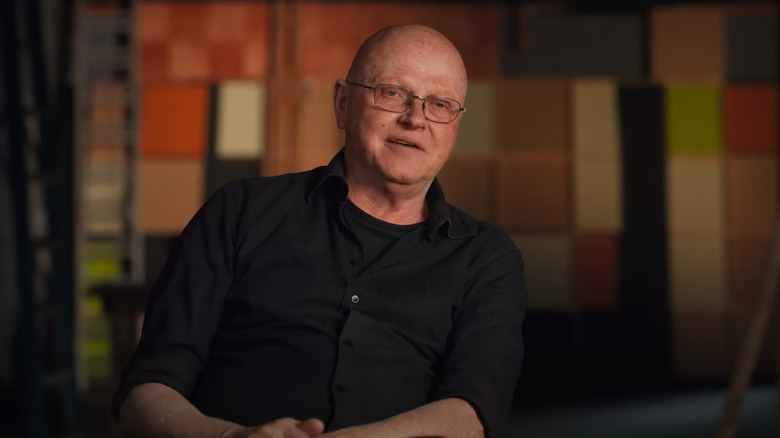 Of course, it also depends on the effects itself. Bad practical effects, though campy, can still attain a kind of cult status. There’s an entire genre of retro horror and sci-fi flicks that can attest to that. But if your movie has bad CGI, either because it’s too close to the uncanny valley or it’s just visually incongruent, it usually doesn’t get a second chance. For Muren (seen above), the choice between the two is self-evident:

“I actually, in some ways, prefer a practical thing that doesn’t look right. I can’t relate to a digital image [that looks fake]. I don’t feel like I can touch it. If it’s done right, it’s great. I totally love it. It’s just that there’s so much work that the industry has had to do lately and the budgets have been cut so much, there’s not enough time to refine it. I don’t think that’s very good. I still like seeing something and thinking, ‘Hey, they tried.’ I feel that if I reached out, I could touch that thing.”

There was a time when CGI was used to fill the seemingly impossible gaps that practical effects couldn’t. Today, it feels less like a refined tool and more like a catch-all for any production that can afford it. CGI can be used when it’s not really needed, and even in scenes where it’s required, budget cuts can lead to it still looking subpar.

If you’re going to put special effects in your film an essential question should be, “Will this outlast the next few decades?” A great example is “Jurassic Park,” a film Muren also worked on which combined the use of constructed models enhanced by CGI. The T-rex from the film has famously stood the test of time and even beats out modern attempts to recreate the magic that made the creature so realistic. But despite “Star Wars” ushering in the digital age of filmmaking, the franchise hasn’t totally forgotten its practical roots, especially in recent years.

The Circle Is Now Complete 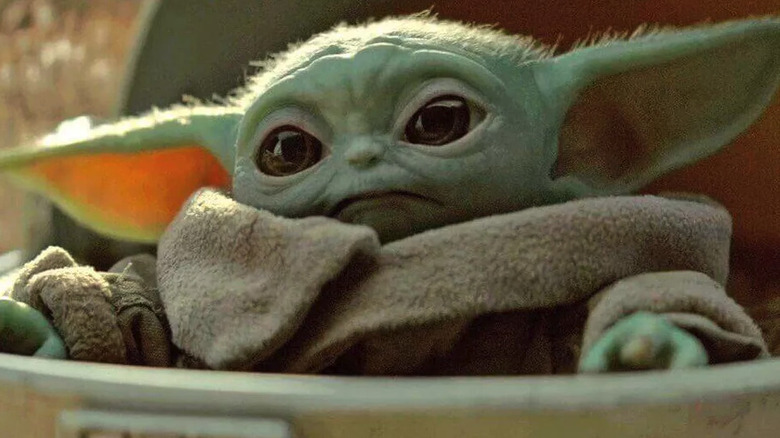 Obviously, “Star Wars” has not always followed Muren’s advice to choose practical effects over digital renderings. But that’s changed in the last few years or so with the advent of standalone films like “Rogue One” and the new Disney+ shows such as “The Mandalorian.” During an episode the behind-the-scenes documentary series “Disney Gallery: The Mandalorian,” Bryce Dallas Howard, who has directed two episodes of the series so far, spoke on the magic created from practical effects:

“There is a realism to this series that exists because so much of what we shot ended up being practical. The actors are not in mocap suits just surrounded by green and blue, it’s not just a totally imaginary world.”

Jon Favreau and Dave Filoni often liken it to playing with their “Star Wars” toys. In the documentary series, Favreau said, “You get your Boba Fett figure and your Jawa and you get them to fight, or you pull out the sandcrawler or the TIE fighter,” he said, and you let your imagination go. They’ve also used miniatures for starships and stop-motion animation for the blurrgs, not to mention a model for IG-88 that was originally built for lighting reference, but ended up being valuable practically because it could swivel. Furthermore, there are shots in “The Mandalorian” that use miniature models, CGI, and Stagecraft technology.

But what would “Star Wars” be without puppets? Creating Kuiil, everyone’s favorite Ugnaught, required the talents of Misty Rosas, who controlled the character’s movements while wearing a prosthetic head operated by puppeteers. Meanwhile, the adorable Grogu puppet took four to five people to move, charming everyone, including co-star and filmmaker Werner Herzog. As Herzog put it, when “technology becomes invisible,” that’s when the magic happens.

With “The Book of Boba Fett” and “Obi-Wan Kenobi” series continuing this approach, it’s clear “Star Wars” is rightfully looking back to its practical effects past for inspiration while still utilizing modern innovations, creating movie magic that spans generations of ingenuity.

The post The Importance of Star Wars Returning to Its Practical VFX Roots appeared first on /Film.

‘Slash Film: Paul Dano’s Riddler Comic Was Born On The Set Of The Batman’