By the time Avatar 2 is released in theaters in December 2022, it will be 13 years since James Cameron‘s original sci-fi blockbuster hit theaters. Though it feels like interest has waned over the decade-plus, there’s undoubtedly still curiosity about what has taken the Terminator and Aliens director so long to get these sequels off the ground and whether it will be worth the wait.

We’ll get a hint of the answer starting this Friday when the Behind Pandora video series kicks off, providing a glimpse behind the scenes at the various departments and crew members making it happen.

Avatar franchise producer Jon Landau posted this photo to Instagram with the announcement of Behind Pandora: 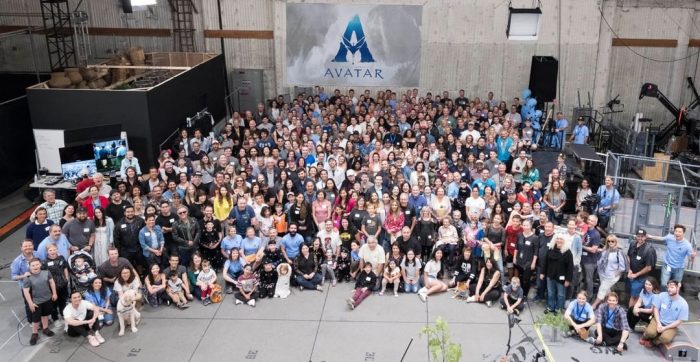 “I am excited that beginning this Friday the Avatar social pages will be introducing “Behind Pandora” stories which will take a look some people on the behind-the-scenes team who are a critical part of bringing to life the world, the characters and the story of Avatar.

All films are collaborative efforts. The Avatar sequels are no exception to that. In fact, because of the scope and scale of the productions, the number of people who contribute to the final result is greater than on many other movies. As a small way of acknowledging the contributions of so many, over the coming weeks, we are going to introduce you to individuals from various disciplines across the project and share with you their role on the movies and a little about their personal experiences.

While we will not be able to single out everyone on our team, the people we recognize are intended to represent the hundreds of others who also work on the films. We are thankful to each and every one of them.”

This collection of videos showing off the making of Avatar sequels could be akin to the production diaries that Peter Jackson did for his remake of King Kong leading up to the release of the movie in 2005. Those videos provided one of the most comprehensive looks behind the scenes of the making of a major, special effects-driven blockbuster movie. If you haven’t watched them, they’re a must-see for cinephiles, no matter how you feel about the remake in general.

However, unlike the Avatar sequels, the story of King Kong was familiar and there wasn’t much to spoil. When it comes to the expansion of the world of Pandora, James Cameron may not want to reveal too many details from the set, so this might be more limited in revelations about the movies.

Stay tuned to this post to keep up with the videos, which we will add right here every Friday in chronological order.

Avatar 2 is slated to hit theaters on December 16, 2022, followed by three more sequels every other year after that.

The post The Making of the ‘Avatar’ Sequels is Getting Chronicled in a New ‘Behind Pandora’ Video Series appeared first on /Film.

/Film – ‘Slash Film: The Making of the ‘Avatar’ Sequels is Getting Chronicled in a New ‘Behind Pandora’ Video Series’
Author: Ethan Anderton
Go to Source
December 10, 2020

‘Slash Film: ‘What If…?’ Trailer Breakdown: A Journey Through Vast New Realities of the Marvel Universe’

The Best New Movies To Watch On Christmas

‘Slash Film: Timothée Chalamet Had a Blast with Pete Davidson on a Smashing ‘Saturday Night Live’’