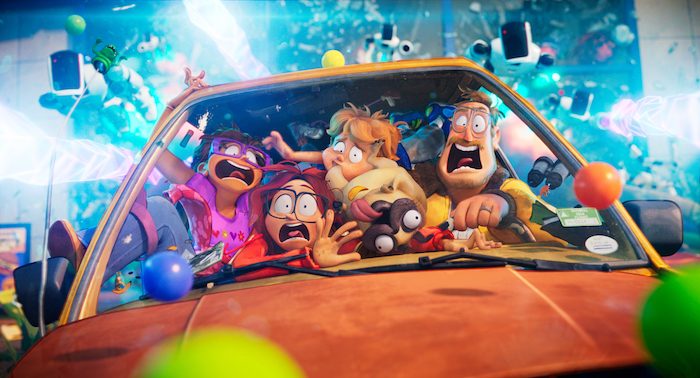 Netflix is notoriously secretive when it comes to its statistics, but every now and again they creak the doors open and offer us a peek at their streaming numbers. This time, they come bearing very exciting news — The Mitchells vs The Machines is winning families over, one household at a time.

The Sony animated sci-fi comedy was watched by 53M member households in its first 28 days, making it the most-watched animated film on the service.

Close behind is another gem from the past year, the Academy Award-winning Over The Moon which 43M households tuned in to stream. Third place goes to last years The Willoughbys, which grabbed 38M households in its first month. All three are heartfelt family stories and it’s no surprise to see them garnering such large audiences.

Even with its staggering numbers, The Mitchells vs the Machines wasn’t the streamer’s biggest movie this quarter. That honor goes to Zack Snyder’s Army of the Dead, with a massive viewership of 75M member households.

The Mitchells For The Win!

But let’s not undersell the accomplishments of this dazzling animated feature. Mitchells had an incredible team behind the scenes, including the animation-producing duo Phil Lord and Chris Miller. Mike Rianda made his directorial debut with the film but previously proved his chops on the widely beloved Gravity Falls.

The Mitchells vs the Machines tells the story of a quirky, mildly dysfunctional family overcoming a full-on technological takeover. It’s both a robot uprising movie and a road trip movie, which doesn’t sound like it should go together but actually works perfectly. It marries explosive robot action with down-to-earth family drama and does so to great success.

Sadly, the movie never got its theatrical release which was impeded, like many others, by the pandemic. But Netflix’s acquisition means the film got plenty of well-deserved attention and is now widely available for families to stream again, and again, and again, as a film this fun is definitely worth the rewatch. Plus, its wild visual style is incredibly detailed, burying tons of references and easter eggs for obsessive viewers.

The film features Abbi Johnson as Katie Mitchell, an aspiring filmmaker who struggles to connect with her nature-loving father, Rick (Danny McBride). He struggles to understand her interests and passions and, as Katie prepares to go off to college, they both wonder if their already strained relationship will survive the distance. Luckily, nothing unites a family quite like the end of the world.

That said, even with society collapsing around them, Katie and Rick still have trouble mending their relationship. But Mitchells gives them the time and a ridiculous backdrop to do so, all with clever insights on humanity, technology, generational gaps, and our relationship with the internet. Plus some commentary about corporate greed that is definitely not targeted at any particular multinational technological company…

We have no way of proving it, but Netflix’s numbers (probably) don’t lie. Either way, The Mitchells Vs The Machines is very deserving of its new title.

The post ‘The Mitchells vs The Machines’ is Netflix Biggest Animated Movie Yet appeared first on /Film.

Home Depot’s 12-Foot Skeleton is Back for Halloween and This Year There’s an “Inferno Pumpkin” Version!