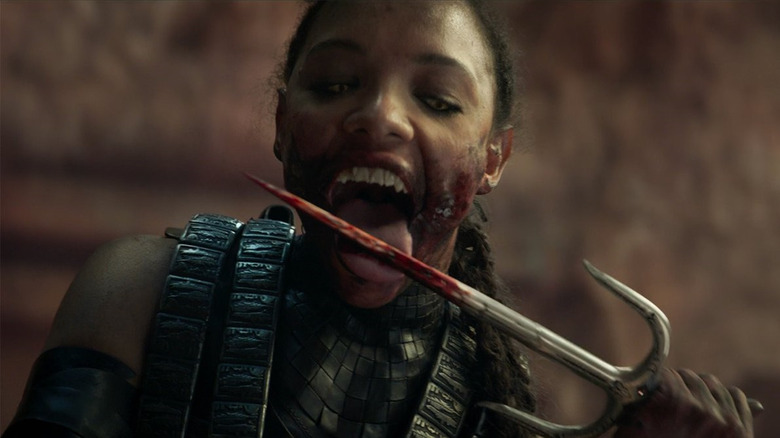 There’s a special, generational magic to “Mortal Kombat.” The original 1992 video game was released through Midway (and subsequently most home gaming platforms), challenging its players to test their might in one-on-one deathmatches. The martial arts tournament that made up the game’s structure always ended in bodily damage – even if both opponents are standing at the end of a timed round, the one with more health damage would suffer an official loss (a well-timed combo as the clock runs down has won many a match, and lost many a friendship). Its greatest gameplay feature also courted the most controversy: its brutal fatalities.

The fatality was an unholy mish-mash of advances in gaming tech and a need to up the ante from the already-popular arcade version of the game. At the end of a match, the victor is prompted by the game announcer to “Finish him/her!” With the right timing, positioning, and all the right controller moves, a player could execute a finishing move that would unquestionably dispatch their stunned opponent. Each character had signature moves: Liu Kang of “Mortal Kombat II,” for example, could (by pressing Down + Forward + Back x2 + High Kick) transform into a hungry dragon that would bite its victim in half and leave the legs standing. Fatalities were a gnarly badge of honor – even when your bestie made your character spontaneously combust or fall into a pit of spikes, the variety and viscera involved made the topic a hot one in the schoolyard, where tips, cheat codes, and rumors were passed around like TikToks.

It makes sense that the ultraviolence would follow the game onto its big-screen adaptations; first in 1995, then a sequel two years later, and finally a 2021 reboot backed by “Insidious” and “Aquaman” director James Wan. According to “Mortal Kombat” (2021) star Lewis Tan, fans looking for buckets of blood weren’t going to be disappointed. He told Variety:

“That was one thing for sure that the director was adamant on. He was like, ‘This is going to be hard R. Try not to make it NC-17, but let’s take it all the way up until that point.’ And that’s what we did. But I think he did it really tastefully. He didn’t just try to be super gory and crazy. I’m not into all that, but I think if you’re going to do ‘Mortal Kombat’ correctly, you’ve got to have it.”

It Looked Like Somebody Destroyed A Buffet Line, But There Was No Food.

It’s 1993. You get home from school and toss your backpack into some void on the way to the kitchen, where you’d wrassle up some Dunkaroos or a sandwich and pull out whatever mom told you to and set it in the sink to thaw for dinner. Pending chores, homework, or outside time, that free time was often filled with TV — maybe something educational like “Where in the World is Carmen SanDiego?” — and gaming.

The gruesome kills in the “Mortal Kombat” games made such an indelible imprint on pop culture that even the term “fatality” became shorthand for any finishing move in a game. Naturally, fans coming to Simon McQuoid’s 2021 reboot film would pine for that warped bit of nostalgia, and the martial arts matches deliver. Lewis Tan, who stars as former MMA fighter Cole Young in the film, promised that not only are there fatalities in the live-action feature, but they grossed him out. He told Variety:

Yeah, they’re pretty gruesome. I walked on set one day and I didn’t know what was going on, and I accidentally walked into a post-fatality set and I felt pretty sick to my stomach. [Laughs.] I was like, “What the hell is this? What happened here?” It looked like somebody destroyed a buffet line, but there was no food.

It’s a trip to learn that Tan was so repulsed by the mayhem on set, considering his career-long intimacy with action and bloody fights. Tan’s father, Philip Tan, is a martial artist and stunt coordinator who moved his family to Los Angeles while he crafted stunts for Tim Burton’s “Batman.” Lewis himself isn’t a stranger to fisticuffs, having done roles on Marvel’s “Iron Fist” and this year’s “Shadow and Bone.”

Any guesses on which fatality scene Tan stumbled upon?

The post The Mortal Kombat Set Got A Little Too Gruesome For Lewis Tan’s Tastes appeared first on /Film.

/Film – ‘Slash Film: The Mortal Kombat Set Got A Little Too Gruesome For Lewis Tan’s Tastes’
Author: Anya Stanley
Go to Source
May 3, 2022

‘Slash Film: The Growing Cinematic Trend Of The Abortion Road Trip Movie Is Our Bleak Reality’

Blu-ray Review: EYIMOFE (THIS IS MY DESIRE), Intimate Lives of Quiet Longing