Leslie Grace, who was recently seen dancing across the side of a building opposite Corey Hawkins in Jon M. Chu’s musical, In the Heights, is heading to Gotham City. Grace has won the role of Batgirl in Warner Bros.’ and DC’s upcoming movie about the cape-and-cowl-clad crime-fighter Barbara Gordon, the daughter of Gotham City Police Commissioner Jim Gordon.

The Wrap reports that after being one of the top contenders for the role with Haley Lu Richardson (Columbus, The Edge of Seventeen), Grace has earned the title role in Batgirl, a new live-action comic book movie that’s being developed specifically for HBO Max. Adil El Arbi and Bilall Fallah, who directed Bad Boys For Life and will soon direct episodes of the Marvel Studios Disney+ series Ms. Marvel, will be behind the camera for this film, which was written by Bumblebee, Birds of Prey, and The Flash writer Christina Hodson.

The outlet points out that Grace, a Dominican-American actress, is the third Latina cast in a DC superhero project; the others are Sasha Calle as Supergirl in The Flash, and Rachel Zegler playing a mysterious role in Shazam: Fury of the Gods. Here is her reaction to the casting news: 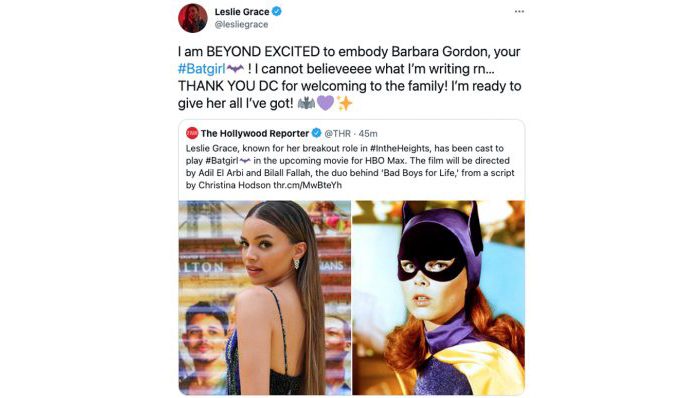 What Exactly Will This Movie Be About?

My biggest question now is: what’s the take for this movie? The Wrap says Grace is playing Barbara Gordon, which seems to imply that there’s going to be a secret identity dynamic at play here between father and daughter; that tension has been a key part of the character’s comic book backstory as well as the foundation of the relationship between Barbara and her father on screen going back to the 1960s Batman television show.

Here’s a free suggestion to WB: cast Jimmy Smits as Commissioner Gordon in this movie so Grace and Smits can replay that dynamic again after having some great emotional clashes in In the Heights.

Also, which Barbara Gordon might Grace be playing here? Will it be the same one that exists in the Matt Reeves universe in which Robert Pattinson is playing Batman/Bruce Wayne?

Now that the multiverse is opening up, there are tons of possibilities for which reality this version of Barbara occupies, and I’ll be curious to see — especially since this is being developed directly for HBO Max — if Warner Bros. and DC try to bring in comic book characters from their other movies or if they’ll keep this one in a silo to maintain a more manageable budget. We still have lots of questions, but I’m excited for Grace (who, frankly, was one of the best parts of In the Heights) and looking forward to seeing what Hodson, El Arbi, and Fallah have up their sleeves.

The post The New Batgirl is ‘In the Heights’ Star Leslie Grace appeared first on /Film.