Typically, we know the titles of upcoming Marvel Cinematic Universe movies years in advance, letting Marvel Studios tease us and taunt with their increasingly intricate grand design. I love it. I also hate it. But the upcoming third Spider-Man movie, and the sixth MCU movie to feature Tom Holland‘s take on Peter Parker, began filming without a title. Blame the fact that Marvel has to share its Spidey productions with Sony. Blame a filming schedule hampered by the COVID-19 pandemic. Blame Agatha Harkness, because it was apparently her all along.

Anyway, the title for the third solo Spidey movie has not been revealed. But a trio of fake titles were unleashed upon social media last night, leading to mass hysteria (Cats and dogs! Living together!). And while the faux titles turned out to be a big goof, they did arrive alongside some actual images from the new movie. Check them out.

The images feature Peter Parker and his buds Ned and MJ (Jacob Batalon and Zendaya) hanging around, looking concerned. Since the previous film concluded with Spider-Man’s identity revealed to the world and the continuously in-over-his-head hero framed for murder, they have every reason to be hiding in shadows, upset about everything. 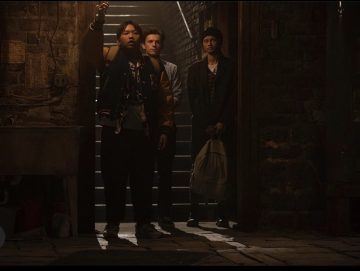 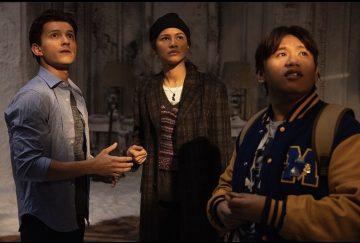 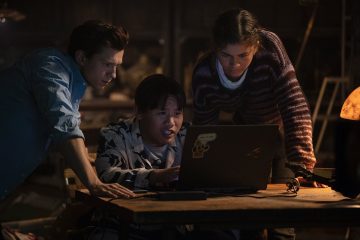 What these images did not reveal was the title for the film. But since everyone expects this new film to keep “home” motif going after Spider-Man: Homecoming and Spider-Man: Far From Home, Holland, Batalon and Zendaya decided to troll everyone with a series of fake title reveals. Depending on your patience for things like this, it was all very amusing or very annoying. For a movie that apparently revolves around the multiverse, a series of “alternate” titles from different dimensions is cute, I suppose.

The first fake title came from Tom Holland, who announced that the title was Spider-Man: Phone Home.

Zendaya was the next to join in, sharing Spider-Man: Home Slice.

But maybe the internet deserves some trolling on this front. The next Spider-Man movie has been a bit of a leaky ship. We know that Benedict Cumberbatch will co-star in the film, returning as Doctor Strange, filling in for the deceased Tony Stark in the “Peter Parker Mentor” role. And with a master of mysticism on hand, it should come as no surprise that things are about to get very weird for the webslinger – it’s been reported that the villains of the film will be familiar faces from past Spider-Man movies, specifically those from the Tobey Maguire and Andrew Garfield eras. There have even been rumblings that Maguire and Garfield themselves could show up, but Holland has said that’s not the case. Unless he’s lying. Or unless they’re hiding vital plot details from him, since he tends to drop spoilers like a clumsy man trying to carry fish on a slick dock.

Spider-Man: Far From Home introduced the concept of the Multiverse, which was promptly proven to be a hoax from the villainous Mysterio. And now, it sounds like the new film will suggest that…maybe it isn’t? After all, that’s the only way to explain all of these Spider-Men and alternate Spider-Man villains running about.

The next Spider-Man movie is once again directed by Jon Watts and is set to hit theaters on December 17, 2021.

The post The Next ‘Spider-Man’ Movie Reveals Three New Images and Trio of Fake Titles appeared first on /Film.

‘Slash Film: TV Bits: Down to Earth with Zac Efron, The Powerpuff Girls, Russian Doll, The Flight Attendant, and More’

JoBlo: STREET GANG: HOW WE GOT TO SESAME STREET Trailer (2021)