He’s responsible for at least one stone cold genre classic, though many would argue for more. He makes (almost) nothing but high-concept original stories, produced and financed in a blockbuster-obsessed landscape that’s increasingly indifferent to anything else. And finally, he happens to be one of the few brand-name filmmakers among general audiences who consistently puts butts in seats at a time when theater attendance, even pre-pandemic, has been flagging badly.

This description, as you may have guessed, reflects the broad strokes of M. Night Shyamalan’s career.

On the face of it, this would seem to put Shyamalan in line for a flattering reputation with widespread acclaim on par with many Film Twitter favorites, but the divisive director is nothing if not a lightning rod for a certain portion of the moviegoing population. Is it deserved, or is that largely because the disproportionate attention paid towards a handful of notorious misfires typically drowns out any and all deeper discussion of his other films? Sometimes, I can’t help but wonder how someone with a different appearance, an Americanized name —  more Americanized than it already is, at least — but the same overall body of work would be perceived.

The following aren’t meant as direct comparisons, to be clear, but imagine if we branded Ridley Scott as a failure because of Exodus: Gods and Kings and Robin Hood or tossed Christopher Nolan into the garbage pile as penance for The Dark Knight Rises and Interstellar. (That’s right, I said what I said!) Along similar lines, yes, we’re all aware Shyamalan made The Happening and The Last Airbender and After Earth. But perhaps the bigger question worth reflecting on is…so what?

Admittedly, no filmmaker can or should sweep their biggest misses completely under the rug (although some would disagree that The Happening deserves to be relegated as such), but that doesn’t mean we can’t refocus the conversation on slightly more compelling territory for a change. Fortunately, this critical re-analysis has already begun on social media and that’s what we’re going to continue to do here.

Once you get over those pesky preconceptions, it’s easier than you might think to find something to love about M. Night Shyamalan’s movies. 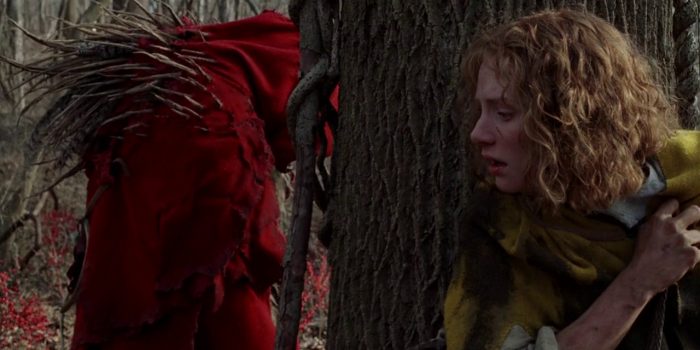 When criticizing movies in casual conversation, we sometimes have an odd tendency to look down our noses and act as if certain questionable elements simply happened for no conceivable reason rather than as a result of very specific and purposeful artistic choices. It’s an incurious, dismissive way to stay in our own bubble and act as if our initial gut reaction is always the right one. This particular brand of snobbery seems like a constant in most Shyamalan-related conversations, like using out-of-context clips as “proof” of technical failings where none really exist.

Generally speaking, we don’t usually tell Nolan to quit his fixation over the nature of time already or demand that Wes Anderson drop his reliance on carefully balanced cinematography. Love them or hate them, we simply accept these quirks as nonnegotiable personality traits that ground viewers in their unmistakable dialect of cinematic language.

Ideally, the same would hold true for many of M. Night’s “Shyamalanisms,” which are more than just passing fancies or ingrained habits or unnoticed flaws. Folks, I’m here to tell you that Shyamalan’s penchant for stilted dialogue/acting and plot twists (which is somewhat overstated) are what make his best movies soar.

Signs and The Village are usually held up as the start of Shyamalan’s decline, filled to the brim with their fair share of unnatural acting that viewers are either on board with or not — but the technique, importantly, isn’t without reason. Both movies revolve around the idea of larger-than-life, fantastical events that are respectively shrouded in horror and gothic romance. Aspects such as Mel Gibson’s painfully awkward line delivery or Bryce Dallas Howard’s blunt, “Say what is in your head” dialogue might be easy to mock, but they’re also sneakily clever ways of marrying filmmaker predispositions with vital character-building. Gibson’s Graham Hess is a repressed former pastor who has lost his faith due to a tragic loss and subsequently buried his emotions, while Howard’s Ivy Walker is a blind, sheltered, yet unabashedly headstrong young woman with romantic aspirations. Why would they ever act any differently than how they do?

In terms of plot twists, Shyamalan himself recently addressed this trend and the pressures of being associated with it:

“Honestly, it’s not one that bothers me because it is my natural cadence of telling stories. I really enjoy it as a viewer, as a storyteller—to unfold things is exciting for me. I think it would be different, let’s say, Sixth Sense… it would be different if Sixth Sense was a book that I happen to adapt. Now I’m like, “Oh, man, they want me to do that?” But that’s naturally how I think. And so Unbreakable and Signs, The Village, it just feels very natural, that cadence. It isn’t something that feels outside of me, I like unfolding stories. In fact, the fun part, for me, of writing stories is picking out the format of how to tell the story. If the story is about you being a killer, how do I tell that story? Is it from your point of view? Your wife’s point of view? Your neighbor’s point of view? When exactly do I find that out, is fun. That’s fun. The storytelling part.”

These are the words of a storyteller who plans out these twists from the very beginning, rather than obligatorily tacking one on at the end of a script. Old might not add to this narrative, but this approach pays dividends in the movies he listed above.

That “natural cadence” results in twists that aren’t simply meant to pull the wool over an audience’s eyes, but rather re-contextualize every second of the movie up to that point and add deeper layers of meaning. Shyamalan could’ve settled for a run-of-the-mill ghost story or psychological drama or colonial horror flick, but each of those last-minute twists vault those films into rarified territory that makes those stories worth telling in the first place.

That leads to my next point, which many a dissenter has wondered: why make these movies?

The Key is Connection

Despite plenty of missteps, Lady in the Water is the M. Night Shyamalan movie that comes right out and says what it’s about:

“Man thinks they’re each alone in this world. It is not true. You are all connected. One act can one day affect all.”

Viewed through this lens, something crucial clicks into place regarding Shyamalan’s filmography. Like many of his films, The Visit, Split, and Glass also deal with loners attempting to reach out and find a connection with others. The journey to ultimately arrive at that endpoint isn’t exactly a straight line, but the narrative twists and genre trappings are meant to draw audiences in with the promise of giving them something more to chew on.

In that light, The Visit is certainly a silly little horror romp that amusingly presents grandparents as the scariest people a little kid could ever imagine…but it’s also focused on the idea of reconciliation and not allowing our parents’ flaws turn into a never-ending cycle. Split takes an exploitation movie approach to a real-world disorder, but the film also boldly proposes that nobody need be defined by feeling “othered.” Glass, most controversially, took a sledgehammer to its own mythology and killed off each of the trilogy’s main characters in underwhelming fashion…but that final scene, as ridiculous as it might seem, optimistically points toward a collective faith in humanity and crystallizes who the real heroes are in that universe.

For a filmmaker so widely panned for an alleged lack of self-awareness, so many of Shyamalan’s movies boast an impressive grasp of tone and a knack for being in on the joke — all while elevating qualities such as empathy and sincerity.

Believe it or not, meeting his movies halfway and extending just the tiniest benefit of the doubt makes all the difference. Ultimately, it’s easy as it is rewarding to look beyond the surface-level memes and come to appreciate a distinctive talent with a flair for incredibly humane, emotional storytelling who is utterly unlike anyone else in the business. In other words, M. Night Shyamalan is the exact embodiment of what many of us claim to want in an auteur. Maybe it’s time we appreciated that.

The post The Real Twist is That It’s Easy to Love M. Night Shyamalan’s Movies appeared first on /Film.

‘Slash Film: ‘The Shawshank Redemption’ 4K Will Tunnel Its Way to Freedom This September’