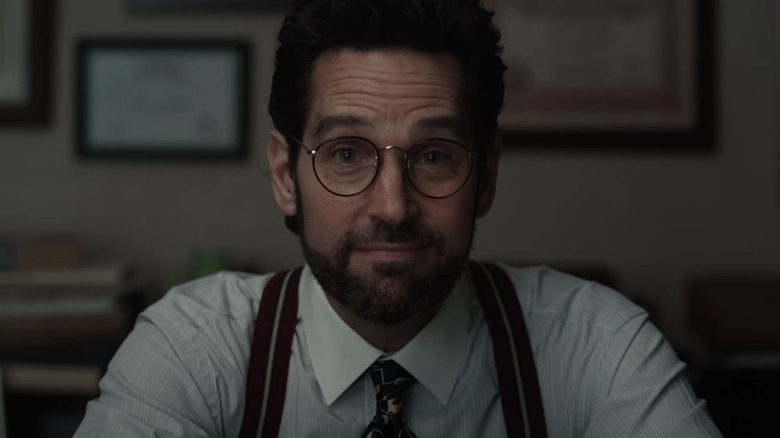 “Anchorman” alums Paul Rudd and Will Ferrell are reuniting to portray a decade-spanning friendship, much more complicated than it seems. “The Shrink Next Door” is a dark comedy based on the true story of a soft-spoken, anxiety stricken man and the therapist who turns his life around … before taking it over.

The Shrink Next Door Trailer

This Paul Rudd fella sure is charming. Maybe a little … too charming.

In “The Shrink Next Door,” Rudd is the optimistic Dr. Isaac “Ike” Herschkopf, a psychiatrist who may be a little unconventional but seems to mean well. He befriends his new client, the ever-anxious Marty Markowitz (Ferrell) and kickstarts a relationship that probably strays from the typical therapist-client dynamic. It isn’t long before Marty introduces Ike as his “psychiatrist, business partner, [and] best friend.” The boundaries of their relationship are certainly blurry, but how bad can it be, if Marty feels better about his life?

Ferrell’s Marty begins the trailer “hiding behind a wall of curtains” according to his sister Phyllis (Kathryn Hahn). And sure enough, Ferrell is seen crouched in a corner of his family-run garment store, having a quiet panic attack. The incident — likely not the first — leads him to Dr. Ike’s office. Then, within a few sessions, Marty appears thrilled with life. But while everything looks like sunshine and rainbows, something darker bubbles beneath the surface. The boundaries of their relationship blurred, Dr. Ike is able to manipulate Marty with ease and weasel his way into the life of his wealthy client. And it only gets crazier from there. For a closer peek at the series, here’s the official synopsis:

“Inspired by true events and an original podcast of the same name, The Shrink Next Door follows the decades-long manipulation and exploitation by psychiatrist Dr. Isaac ‘Ike’ Herschkopf (Rudd) and his longtime patient Martin ‘Marty’ Markowitz (Ferrell),” according to the official logline. “Dr. Ike is accompanied by his unsuspecting wife Bonnie Herschkopf (Casey Wilson), and though Marty may be defenseless against Dr. Ike enticing offerings, his hard-headed sister Phyllis (Hahn) is not.”

Although Hahn’s Phyllis was the one to suggest therapy in the first place, she may be all that stands between her brother and his dangerously unhealthy relationship with Dr. Ike. “The Shrink Next Door” also stars Casey Wilson as Ike’s wife, Bonnie Herschkopf and Sarayu Blue as Miriam. The eight-episode miniseries is written by Georgia Pritchett (“Succession”) and directed by Michael Showalter (“The Eyes of Tammy Faye”) and Jesse Peretz (“GLOW”).

The first three episodes of “The Shrink Next Door” premiere on November 12, 2021, with the rest of the series airing weekly.

Read this next: The 15 Funniest Movies Of The Decade

The post The Shrink Next Door Trailer: Paul Rudd is Will Ferrell’s Very Unethical Therapist in the Apple TV+ Series appeared first on /Film.