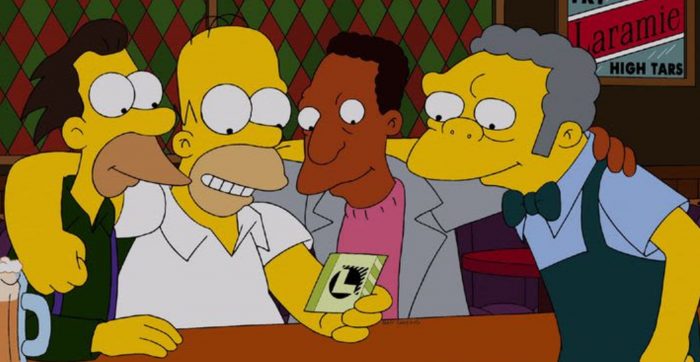 Three years ago, Hari Kondabolu released a documentary called The Problem with Apu, which snowballed into a years-long discussion about The Simpsons and the racial stereotypes it may have perpetuated with a mostly white writer’s room and voice cast. Earlier this year, it resulted in Hank Azaria stepping down from voicing Apu to leave room for an actual Indian actor to voice the character.

And what of the other character of color who Azaria voiced, Carl Carlson? Black actor Alex Désert has made his debut as Homer Simpson’s nuclear plant coworker in the season 32 premiere, replacing Azaria after 30-plus years.

Désert replaced Azaria as the voice of Carl Carlson, Homer’s nuclear plant coworker and best friend to Lenny Leonard, in the season 32 premiere of The Simpsons Sunday night, Variety reported. It’s unclear whether Désert will be Carl’s permanent voice, or if he’ll be voicing other characters in the series.

Désert has long worked in the voice acting sphere, voicing Swarm on Disney XD’s Spider-Man: Maximum Venom and Mr. Bojenkins on Adult Swim’s Mr. Pickles and its spinoff, Momma Named Me Sheriff. He’s also appeared on The Flash (both the 1990 and current version), Better Call Saul, and was a regular on Becker.

The switch comes after the Simpsons producers confirmed earlier this summer that the show would no longer feature white actors voicing non-white characters. Azaria had voiced Carl, a Black character, since the beginning of the show — except for Carl’s first appearance in the season 1 episode “Homer’s Night Out,” where he was voiced by Harry Shearer. This was brought about after the media attention focused on The Simpsons following the 2017 documentary The Problem with Apu, which put a spotlight on Azaria’s voicing of Springfield’s convenience store clerk. Azaria formally stepped down from voicing Apu back in January, after two years of fielding questions about whitewashing in animation — an issue that come to the forefront lately with shows like Family Guy, BoJack Horseman, and Big Mouth grappling with their casting of white actors as characters of color. Of course, this movement towards more diversity has begun to extend to the rest of Hollywood, both behind and in front of the camera, in the wake of the renewed Black Lives Matter protests this summer.

The Simpsons had already begun to make an effort to cast more actors of the same ethnicity as their characters. Kevin Michael Richardson (The Cleveland Show) is now a regular and often voices Black male characters on the show.

The post ‘The Simpsons’ Replaces Hank Azaria With Alex Désert as the Voice of Carl in Season 32 Premiere appeared first on /Film.

/Film – ‘Slash Film: ‘The Simpsons’ Replaces Hank Azaria With Alex Désert as the Voice of Carl in Season 32 Premiere’
Author:

Nothing is predestined: The obstacles of your past can become the gateways that lead to new beginnings.