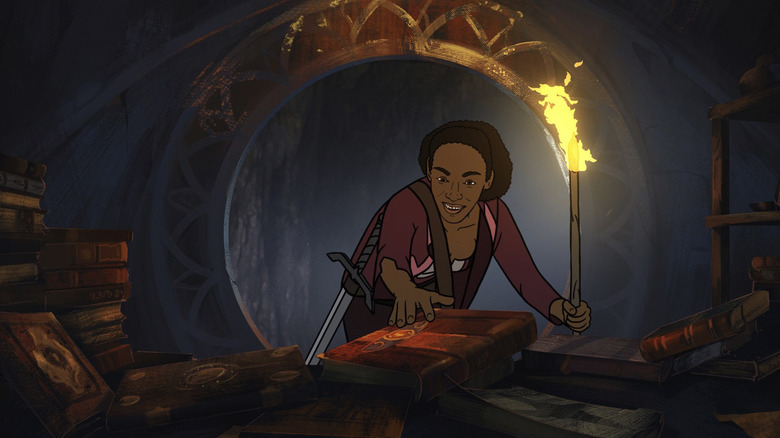 People like Ralph Bakshi and Frank Franzetta left a very specific visual imprint in the realm of fantasy art and storytelling, and now a new project has come along which takes the baton from those veterans and carries it a few steps further in the race. I’m not confident that rotoscoped projects have a vibrant future ahead of them (they are extremely work-intensive), but the style isn’t fully dead yet, and “The Spine of Night” is going to make damn sure everyone knows it by leaning hard into hyper-violence and psychedelic imagery. Check out the full red-band trailer for the movie below.

The Spine Of Night Trailer

Man, this thing looks hardcore. It’s not every day that a rotoscoped movie comes along – the last mainstream release that leans so heavily on this technique that I can think of off the top of my head is Richard Linklater’s “A Scanner Darkly,” and that was released fifteen years ago. So it’s going to be a big deal in some circles that this film exists at all. The film is a passion project for Philip Gelatt, who previously directed 2018’s “They Remain” and wrote the found-footage sci-fi film “Europa Report,” and Morgan Galen King, who directed a rotoscoped fantasy short called “Exordium” in 2013. The two of them co-wrote and directed “The Spine of Night,” which is described as “an ultra-violent fantasy epic” in which “ancient dark magic falls into sinister hands and unleashes ages of suffering onto mankind. A group of heroes from different eras and cultures must band together in order to defeat it at all costs.” The movie premiered in the midnight category at this year’s South By Southwest Film Festival, and while several critics dinged it for its muddled storytelling, it seems to have impressed everyone across the board with its ambitious visuals.

Not only is this thing absolutely dripping with style (not to mention all of that blood), but the cast is outstanding as well: it stars Richard E. Grant (“Star Wars: The Rise of Skywalker”), Lucy Lawless (“Xena: Warrior Princess,” “Spartacus”), Patton Oswalt (“Dude Bro Party Massacre III”), Betty Gabriel (“Get Out”), Joe Manganiello (“Justice League,” “Magic Mike”), Abby Savage (“Orange is the New Black”), Larry Fessenden (“The Dead Don’t Die”), and Rob McClure (“The Good Fight”).

“The Spine of Night” will arrive in theaters and be available On Demand and on digital platforms starting October 29, 2021.

Read this next: Fantasy Box Office Bombs That Deserve A Second Chance

The post The Spine of Night Trailer: An Animated Movie That Looks Like Your Greatest ’80s Nightmares appeared first on /Film.

Sitges 2021: LAMB, AFTER BLUE And Justin Kurzel Among Top Honors

‘Slash Film: Boba Fett’s Armor Explained: How Did He Get It And What Can It Do?’