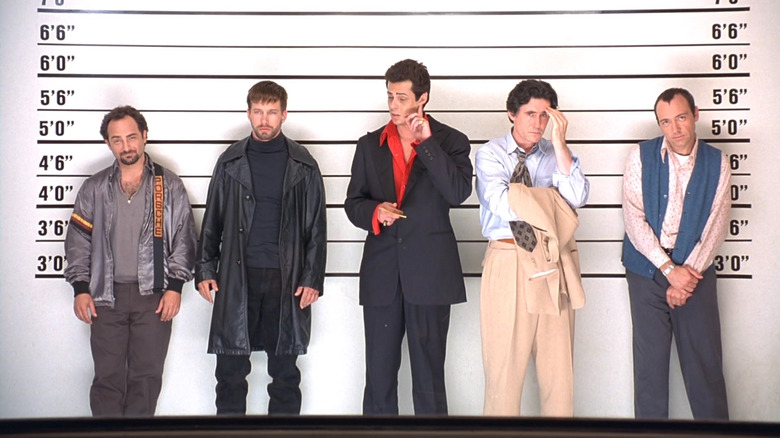 “The Usual Suspects” is a movie with one of the great twist endings of all time, but not everyone was enamored of it back in 1995 when it first built up word-of-mouth buzz among filmgoers. Christopher McQuarrie’s mystery-laden script won the Oscar for Best Original Screenplay, and the Writers Guild of America would go on to rank it one of the 101 best screenplays ever written. However, Pulitzer Prize-winning critic Roger Ebert gave the crime thriller a 1.5-star review and wrote that its flashback-heavy narrative was “so complicated that [he] finally gave up trying to keep track of it.” Even some viewers who like “The Usual Suspects” better than Ebert did may be left with questions after the movie ends, thanks to the nature of that twist ending, which we are obviously going to be discussing here with spoilers.

Watching “The Usual Suspects” now is also a different experience than it used to be due to real-life allegations against director Bryan Singer and star Kevin Spacey, both of whom saw their careers effectively end after they came to light during the #MeToo movement. Yet in a way, the shift in public perception toward them feeds directly into the poster tagline of “a world where nothing is what it seems.” It has rendered “The Usual Suspects” a self-fulfilling cultural prophecy that testifies to the existence of a “devil” in more ways than one, as expressed by the famous movie quote, “The greatest trick the devil ever pulled was convincing the world he didn’t exist.”

Although most people probably know that quote from the movie, it actually dates back to the 1800s, when writers like Charles Baudelaire voiced the same thought using slightly different words. In “The Usual Suspects,” it’s something Spacey’s unreliable narrator, Verbal Kint, says during the frame story, while sitting in an office, telling U.S. Customs agent Dave Kujan (Chazz Palminteri) how he became one of the only two survivors of a fire and shootout on a pier where $91 million worth of drugs was supposedly in play.

Round Up The Usual Suspects 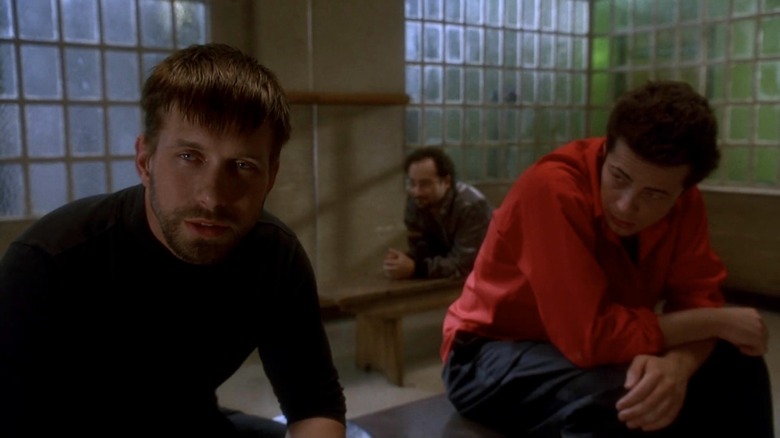 The title of “The Usual Suspects” was inspired by a magazine article referencing another famous “Casablanca” quote, “Round up the usual suspects.” Over the course of the movie, we see how Verbal and a band of criminals who met in a police lineup became embroiled in the plans of one Keyser Söze, a legendary figure in the criminal underworld. Söze is repeatedly likened to the devil himself; his name cuts through the babble of foreign languages and seems to strike fear in all who hear it.

Verbal, meanwhile, is a much more unassuming figure who sits quietly offscreen at first, while his four tough-talking cellmates bicker and scheme. They are Keaton (Gabriel Byrne), McManus (Stephen Baldwin), Hockney (Kevin Pollak), and Fenster (Benicio del Toro). It’s only when the camera pans to the side that we realize Verbal has been there with them the whole time. His real name is Roger, he claims, but people say he talks too much, and that earned him his nickname. This side of him comes out more in the present as he feeds Agent Kujan seemingly random anecdotes about how he spent time picking coffee beans in Guatemala and was in a barbershop quartet in Skokie, Illinois.

Early on, we learn Verbal has political connections, which have granted him total immunity from prosecution for anything other than a weapons charge, despite his involvement in an attack on a ship that left his accomplices and two dozen other men dead. He is due to post bail in “two hours tops” — just the right length for a movie. Dan Hedaya’s police sergeant, Rabin, tells Agent Kujan, “This guy is protected from up on high by the prince of darkness.”

“Söze,” incidentally, is a Turkish word, and if you run it through Google Translate, the English equivalent comes out to “Verbal.” That’s one subtle hint that Verbal and Keyser Söze are one and the same, though of course, the average viewer can’t be expected to know that offhand.

The Man With The Plan 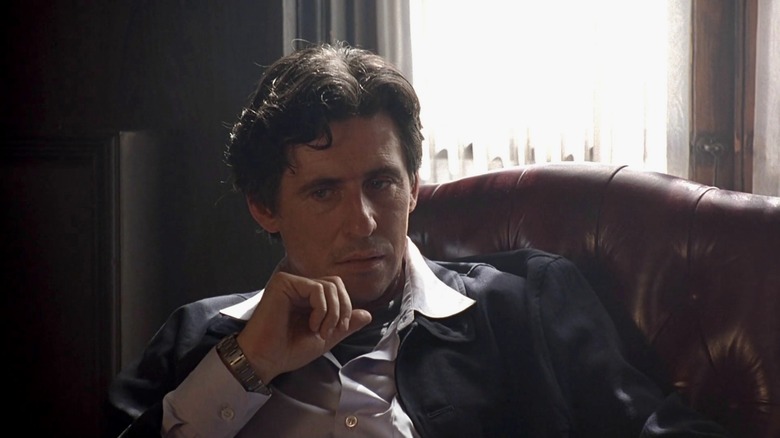 Although McManus refers to Verbal as “the man with the plan,” it’s initially Keaton who is the focus for both Agent Kujan and the audience in “The Usual Suspects.” Keaton has a criminal history, but he faked his own death and tried to go straight, only to get reluctantly drawn back into a job with McManus and the others. Agent Kujan has a grudge against Keaton, and he doesn’t think much of Verbal, a “gimp” con artist with cerebral palsy, who can’t even seem to work a cigarette lighter (an important misdirect, since Söze is seen using a gold lighter).

As he tries to get to the bottom of what happened on the pier, Agent Kujan even leans in and tells Verbal, “I’m smarter than you.” These words will come back to bite Agent Kujan at the end when it becomes clear that Verbal has, in fact, outsmarted him, using reverse psychology on him and pretending to defend Keaton, all the while shifting blame onto him.

Unbeknownst to Keaton and his accomplices, they have all crossed paths with Söze in the past, stealing from some of the middlemen in his elaborate network. Söze’s lawyer, Kobayashi (Pete Postlethwaite), acts as his chief go-between, explaining that he orchestrated the police lineup that brought the men together at the beginning of the movie. Kobayashi then threatens their loved ones and blackmails them into attacking the boat under the pretense of eliminating Söze’s drug rivals.

In reality, this is just a ruse to get Verbal/Keyser onto the boat so he can personally kill Arturo Marquez (Cástulo Guerra), “a stool pigeon for the Justice Department” and one of the few people left living who can provide a facial ID on Söze. Agent Kujan delivers his own plot explanation when he says:

“There were no drugs on that boat. It was a hit. A suicide mission to whack out the one guy that could finger Keyser Söze. So Söze put some thieves to it. Men he knew he could march into certain death.”

The Devil Is In The Details 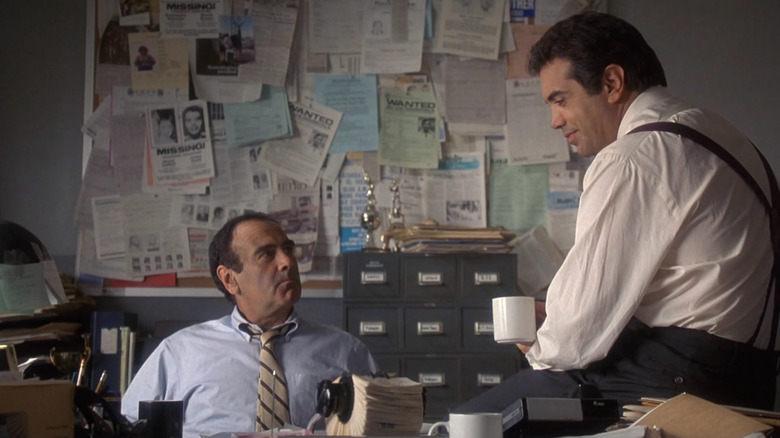 Agent Kujan tells Verbal, “Convince me. Tell me every last detail.” So that’s what Verbal does, lifting names like “Redfoot” from the bulletin board and mixing lies with the truth, per the devil’s M.O. The details obscure that Agent Kujan has Keyser Söze sitting right in front of him. Kujan thinks he’s got it figured out, and to an extent, he does, but he’s got the wrong man in mind. You’d need to take everything he says about Keaton being Söze and apply it to Verbal.

The reveal of Verbal’s true identity, confirmed by fax with a police sketch, doesn’t negate the events of “The Usual Suspects.” It simply leaves the viewer to infer that maybe some or all of what Verbal describes did happen, but he downplayed his own role in it. In flashbacks, for instance, the camera pushes in on Verbal’s hiding spot behind the rope coils on the pier, but there’s no one there. Instead of being a passive observer, he was an active participant in what went down in and around the boat.

Verbal, in his guise as the boogeyman Söze, was the blinding, almost supernatural light who shot Hockney in the back and then stabbed McManus in the back. He killed Marquez and Keaton, tossed the cigarette that ignited the trail of gasoline on the boat, and later caught up with Keaton’s girlfriend, Edie Finneran (Suzy Amis), killing her offscreen, too, because she was Marquez’s extradition lawyer.

Although the movie depicts flashback scenes where Verbal is not present — such as the penultimate exchange between Keaton and McManus, where Keaton tells him there’s no cocaine on the boat — these can perhaps be explained as visualizations of things characters told Verbal or things he imagined or invented for the sake of manipulating Agent Kujan. It’s only after Verbal has collected his gold lighter and watch and left police headquarters in the present that we get a triple-take or stutter-cut, with Agent Kujan dropping his coffee cup and realizing even Kobayashi’s name was taken from the bottom of it.

A Rumor’s Not A Rumor That Doesn’t Die 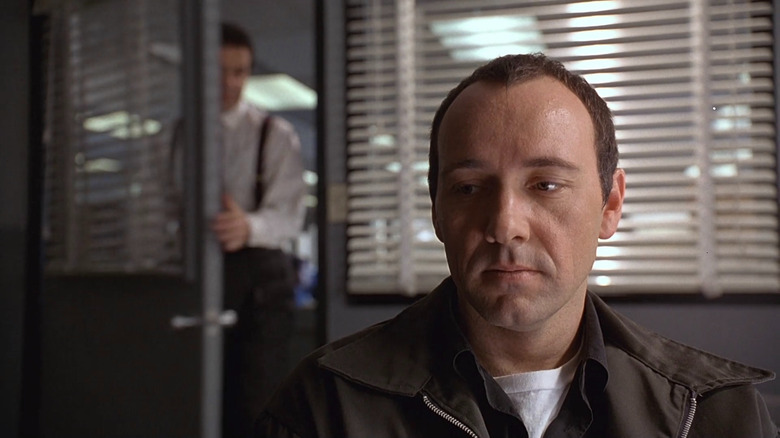 On the sidewalk, Verbal straightens out his limp and flexes his hand. Part of what makes the reveal of his masquerade work so well is the montage of voices and images that washes over the viewer, reminding them of everything they’ve learned, and how this builds on it and subverts it. Having the same crew member, John Ottman, handle both the music and editing, allowed “The Usual Suspects” to achieve a good synergy between the two disciplines.

A 2016 survey showed that Americans were statistically less likely to believe in the devil than God. “The Usual Suspects” takes viewers coast to coast, from New York to Los Angeles, and it has Keaton insisting there is no Keyser Söze. “This guy’s a pipe dream,” he says.

Verbal, too, recognizes Söze has become “a myth, a spook story that criminals tell their kids at night.” He tells us, “Keaton always said, I don’t believe in God, but I’m afraid of him. Well, I believe in God, and the only thing that scares me is Keyser Söze.”

The mundane truth of Söze and banality of evil is that he’s not some long-haired Turk who came walking out of the fire. He’s just a guy with a widow’s peak who no one takes seriously until it’s too late. In a way, that’s scarier than any horror movie because it’s closer to some semblance of the real world.

At the turn of the millennium, Bryan Singer was still a respected superhero film pioneer for “X-Men,” while Kevin Spacey had recently won two Academy Awards for “The Usual Suspects” and “American Beauty.” The disturbing sexual assault allegations against them tarnished their reputations and made it look like they were real-life versions of Keyser Söze.

Since then, “The Usual Suspects” has taken on a whole new dimension. It’s a movie that shows the devil is sometimes real and hiding in plain sight. As Agent Kujan puts it, “A rumor’s not a rumor that doesn’t die.”

The post The Usual Suspects Ending Explained: The Greatest Trick the Devil Ever Pulled appeared first on /Film.