Netflix’s Geeked Week is almost over, but there’s a whole lot of Witcher news the streaming platform has thrown at us before we all gallop off into the weekend.

We already knew that season 2 of the show, which stars Henry Cavill as the gruff and sometimes shirtless Geralt of Rivia, is coming sometime in 2021. And while the Geeked Week presentation still didn’t reveal the official release date, we did get some footage of Ciri (Freya Allan), who had her own journey in season 1 and will likely play a larger role in season 2.

The 12 seconds of footage shows us a grown-up Ciri looking to find things out, no matter what the danger. A few quick shots in the clip have her crying wrapped in furs and, later, riding a horse looking very determined and serious. Check out each precious second of the footage here:

Lost in the woods no more. Meet Ciri in #TheWitcher Season 2. #GeekedWeek pic.twitter.com/zIweEHxtYw

Other scenes flash by like a Witcher fever dream. If you go through it very, VERY slowly, you may catch glimpses of Ciri fighting, an important-looking knife, phrases in a rune-like language, a very gory corpse, as a sewer-ish corridor, and the back of a head dressed in armor.  What does all this mean? I have no idea!

I’m intrigued though, and Ciri seems badass. What we didn’t see was Cavill at all, which isn’t too surprising given the clip is supposed to make us excited about Ciri. I also didn’t see (though I certainly could have missed it) anything referencing the magical powers she exhibited in the first season.

We do know (spoiler!) that Ciri is with Geralt now (at least they were by the end of the second season), so there’s a good chance the two of them will be off questing together in season 2. When we will see them together, however, remains to be seen, though Netflix has promised it will drop before the end of the year. 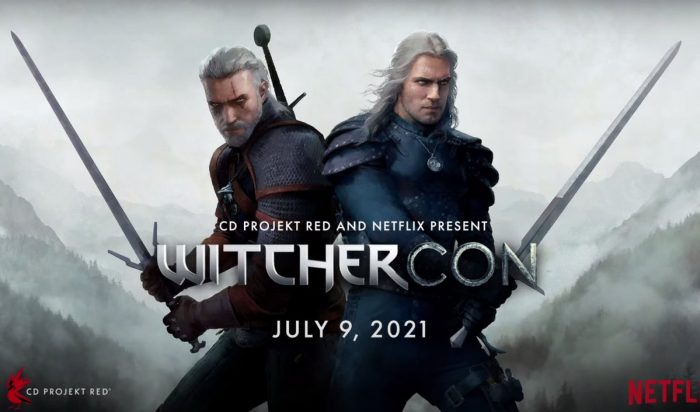 There’s Going to Be a WitcherCon, the Event Witcher Fans Didn’t Know They Wanted

In the meantime, there’s WitcherCon. What the hell is that, you may ask? There was a lot of Twitter intrigue going on earlier today suggesting something fun will be happening on July 9. That fun turns out to be WitcherCon — a global internet celebration of all things Witcher.

The developer of the Witcher video games, CD PROJEKT RED, and Netflix will be hosting the event, which will feature a bunch of panels spotlighting the people who’ve brought us the game, as well as Henry Cavill as Geralt of Rivia.

As someone who watched and enjoyed the first season of Netflix’s Witcher, the idea of a con seems a bit…much. Who am I, however, to deny other Witcher fans the chance to marinate in every nook and cranny of the ever-expanding Witcher universe?

The con also promises more reveals about upcoming projects, which will likely whet the appetite of many a fan. There will be never-seen-before Witcher footage and previews of the upcoming mobile game, The Witcher: Monster Slayer, for example. Netflix’s animated Witcher film, Nightmare of the Wolf, will also get some love, along with Witcher comic book series and a bunch of merch fans will likely throw a coin to.

The post ‘The Witcher’ Season 2 Reveals First Footage as WitcherCon is Set for July appeared first on /Film.

‘I Saw What You Did’: Todd Farmer and Patrick Lussier Discuss the Dark Castle Remake That Never Came to Life [Phantom Limbs]