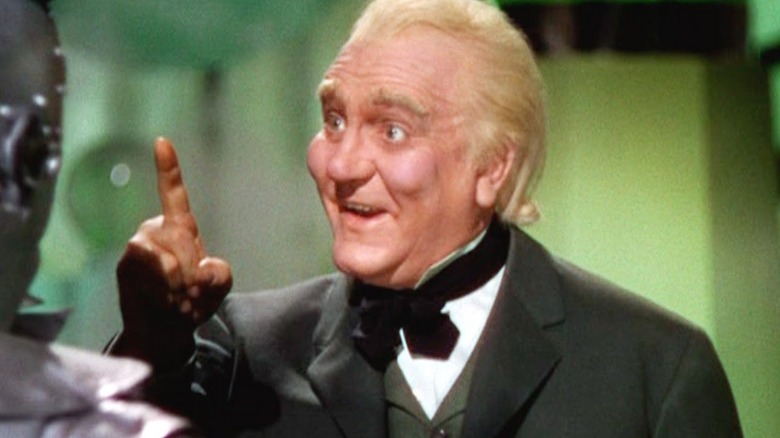 Because of the popularity of 1939’s “The Wizard of Oz,” a movie that was notoriously dangerous to film, modern audiences have a great deal of information about its production. Many books have been written about “The Wizard of Oz.” I recommend “The Making of The Wizard of Oz: Movie Magic and Studio Power” (1977) by Aljean Harmetz for a good historical view of film production in 1939.

But even for those of us who have seen the film dozens if not hundreds of times, there may be details, lyrics, nuances, and even actors we may have missed. For instance — and this may just may be a revelation of how thick I truly am personally — I didn’t notice that actor Frank Morgan appeared in the film in five different roles.

Your mockery of my cluelessness may begin now. 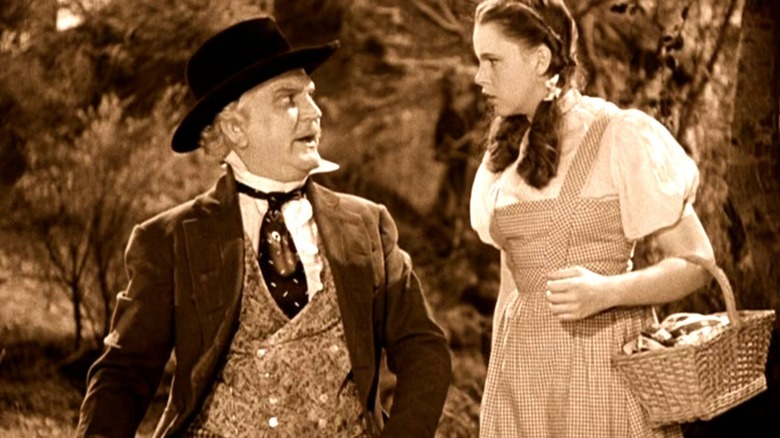 It’s easy to see Frank Morgan as Professor Marvel in the early, sepia portion of “The Wizard of Oz.” Indeed, one of the conceits of “The Wizard of Oz” is that the creatures that Dorothy meets in Oz have analogues back in Kansas. The Wicked Witch of the West is derived from the evil Myra Gulch (Margaret Hamilton), the angry neighbor who wants to murder Toto. The farmhands Zeke, Hunk, and Hickory are played by Burt Lahr, Ray Bolger, and Jack Haley, who not only would play the Cowardly Lion, the Scarecrow, and the Tin Woodman respectively, but who each give shout-outs to the qualities their analogues would have (Zeke shouts “Have a little courage!,” Hunk says “You’d think you didn’t have any brains at all!,” etc.).

This is also true of Professor Marvel, the itinerant con man and fortune teller that Dorothy meets immediately after running away. Professor Marvel, after sneaking a peek at a photograph in Dorothy’s running-away basket, convinces her to return home to her Aunt Em (Clara Blandick) who he says is falling ill from sadness because of Dorothy’s absence. She returns on her own, realizing that her home is important to her.

This will, of course, parallel the fact that Morgan also plays the Wizard of Oz himself at the film’s conclusion, and that the Wizard attempts to fly her home in his balloon. This is after he reveals himself to be a huckster who conned his way into the position of Oz’s local deity. He does, however, accidentally fly away without Dorothy, forcing Dorothy to return on her own and realize that her home is important to her.

Who Rang That Bell? 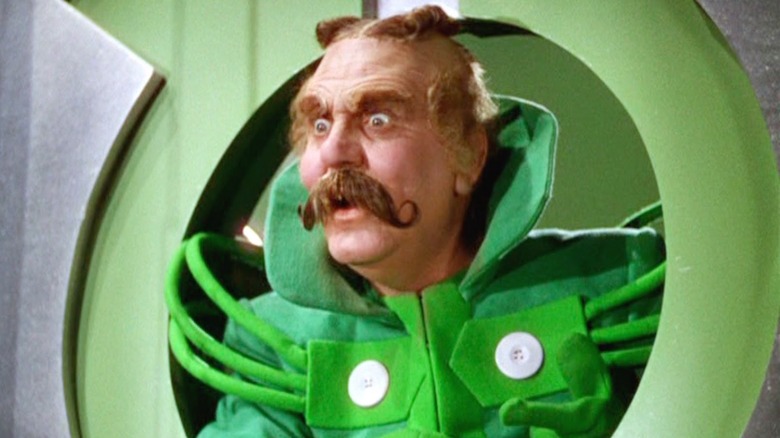 Frank Morgan played three different roles as Dorothy and her retinue begin trekking through The Emerald City. He played the squeaky-voiced doorman who appeared in a portal at the Emerald City who would not admit Dorothy until he saw her ruby slippers. He played the carriage driver — the one with the Horse of a Different Color — who takes our heroes to the salon to be refurbished in time to see the Wizard. And he played the ostentatious and blubbering guard at the Wizard’s chamber (“I had an Aunt Em myself once!”). Each of these roles required a different piece of outlandish postiche: a coiled handlebar for the doorman, a Cossack-style beard for the carriage driver, and a veritable shower curtain of a mustache for the guard.

None of these characters have names, sadly. 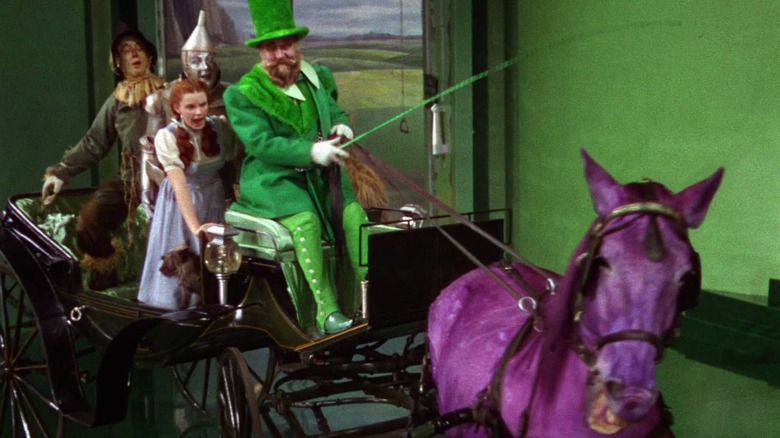 Frank Morgan began his film career during the silent era, and was an enormous presence in the world of radio; “The Frank Morgan-Fanny Brice Show” (previously incarnated as “Maxwell House Coffee Time“) was an enormous hit, rating only below “The Jack Benny Program.” Morgan, then, was known for his versatility as a performer, and could easily pick up outsize character parts with ease. It’s entirely likely that the director of “The Wizard of Oz” (likely Victor Fleming, although the film notoriously changed hands several times throughout production) simply wanted to show off Frank Morgan’s talents. One might find a modern analogue in Eddie Murphy, who would frequently play several roles in each of his films.

And while that would be reason enough to have an actor in several roles, the inclusion of multiple Morgans may be an homage to L. Frank Baum’s original 1900 novel. A conceit from the book that was dropped for the film was that the citizens of the Emerald City all needed to wear green-tinted glasses as to protect their eyes from the emerald brilliance of the city. It would later be revealed that the Emerald City itself was, in fact, an elaborate façade, and there were no actual emeralds; it was the glasses actually providing the emerald brilliance. The entire Emerald City was a act of subterfuge, faking the majesty of the government. Draw your modern political parallels now.

It’s been argued that Frank Morgan was, in fact, playing the same character all throughout Oz, changing his appearance to inflate the local population in front of tourists. Or perhaps he was carefully trying to manipulate the heroes; trickery is, after all, the Wizard’s stock in trade, and it was important to him that the Emerald City appear a very specific way. The multiple roles was all meant, then, to serve as a clue as to the falseness of the Wizard himself. Something, we’re meant to key into, is up.

The Man Behind The Curtain 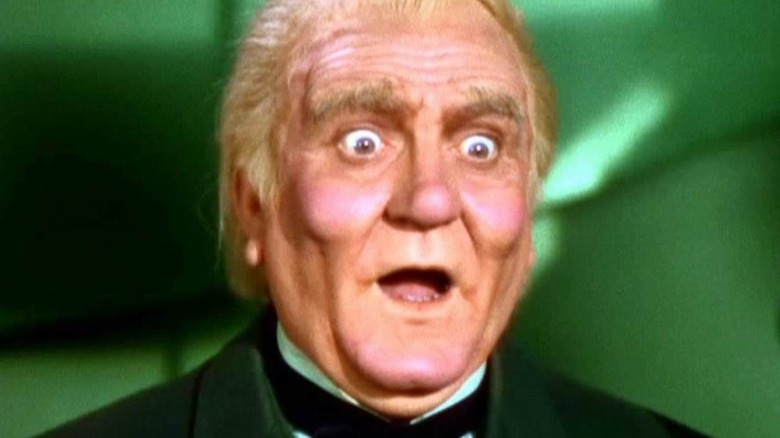 Frank Morgan’s film career, as mentioned above, began during the silent era and continued throughout the 1940s. Morgan was nominated for two Oscars: Best Actor in 1934 for “The Affairs of Cellini” (he played the Duke of Florence) and Best Supporting Actor in 1942 for “Tortilla Flat.”

He also starred in several Best Picture nominees in addition to “The Wizard of Oz,” including “Naughty Marietta” (if you want to see the DNA of every single Disney animated musical, see “Naughty Marietta.” It’s great), the Best Picture winner “The Great Ziegfeld,” and 1942’s “The Human Comedy” with Mickey Rooney. In that latter film, Morgan plays the head of a telegraph office who is always so blind drunk that the Rooney character has to regularly revive him from his drunken stupor to do his job. It was the 1940s, so his alcoholism was played for laughs. This also likely stemmed from the fact that Morgan himself was a notorious alcoholic, and would drink large quantities of champagne on the set of “The Wizard of Oz.”

Indeed, in a story from The History Collection, director Fleming even instructed Morgan to go to his secret suitcase stash and have a drink when he was acting surly on the set. That same article also points out that Morgan was a replacement for the original Wizard actor, W.C. Fields (and can you imagine Fields in the role??), also known for his “drunk” roles. Clearly this was a quality the director wanted.

Morgan, after hundreds of films and many radio appearances, passed away in 1949 at the age of 59.

Read this next: The 14 Greatest Movie Musicals Of The 21st Century

The post This Actor Played Five Separate Roles in The Wizard of Oz appeared first on /Film.