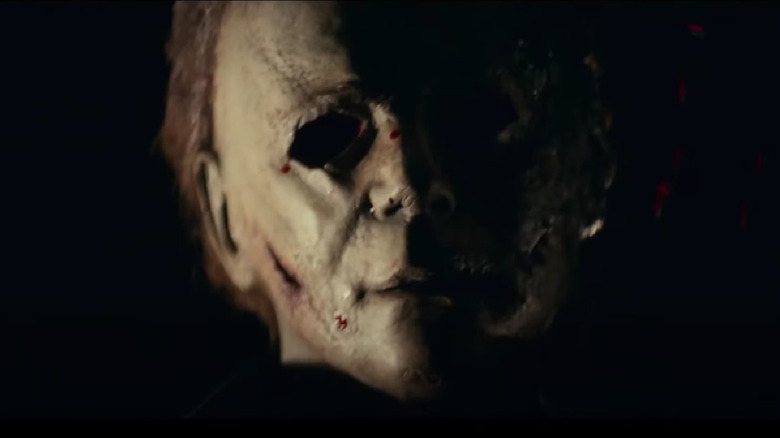 With “Halloween Kills” arriving in just a week, director David Gordon Green is aware of the pressure facing him. In a fresh new featurette, the “Halloween” director joins the cast and crew in hyping up the anticipated sequel: “It’s called ‘Halloween Kills’ and it has to live up to that title.” Franchise star Jamie Lee Curtis goes even further to say that while the last “Halloween” was Laurie Strode’s story, the upcoming “Halloween Kills” is “the town’s story.”

In a brand new behind-the-scenes video, footage from “Halloween Kills” focuses on not just Michael Myers’ killing spree and the survivors’ trauma, but expands that exploration to a collective fear and wariness. How does the town of Haddonfield process its trauma? How do they get to the mob-like point shown in the clips?

“Halloween Kills” is David Gordon Green’s sequel to 2018’s “Halloween,” itself a direct sequel to John Carpenter’s 1978 original slasher, “Halloween” (technically, Green’s is the third “Halloween II” made, if we’re keeping score). Miramax has joined forces with Blumhouse Productions to resurrect the classic slasher franchise and correct course on a long-convoluted continuity. Laurie Strode (Curtis) is reintroduced as the survivor of Michael Myers’ killing spree forty years before, and Myers, or “The Shape” as he’s been called, has escaped from Smith’s Grove Sanitarium during a prison bus transfer, and the body count rises dramatically until Myers gets caught in Strode’s booby-trapped house of horrors. In a final showdown, all three generations of Strode women go toe-to-toe with the killer, eventually blowing off a couple of his fingers and trapping him in the basement before setting the room aflame. By all appearances, Michael is dead, and the women have barely escaped with their lives. So how do you expand from a multi-generational battle for the sequel?

You go bigger, according to co-writer Danny McBride. “David was just really clear that he wanted to explore the effects of violence and how it affected Haddonfield,” McBride says.

As shown in new “Halloween Kills” footage that dropped this week, it’s not just Laurie that wants to throw down. The clips and this featurette shows growing mobs of angry townsfolk, an amped-up iteration of the redneck mob that forms to pursue Myers in Dwight H. Little’s “Halloween 4: The Return of Michael Myers.” In fact, the working title of “Halloween Kills” was “Mob Rules” (also the title of a great Black Sabbath album). It’ll be interesting to see how it goes down if they do get a hold of him. Will it be a neighborhood beatdown, like East LA residents collectively jumping the notorious “Night Stalker” Richard Ramirez after recognizing him on the street? Will he tear through the crowds like so many hospital staffers and cops he’s slain so many sequels before? Impossible to tell now, but this is a sequel, and sequels have expectations. The “bigger, badder, nastier version” Green promises has more blood and more thrills, which Curtis backs up. “It’s really intense,” she adds in the video.

The post This Halloween Kills Featurette is All About Those Michael Myers Kills appeared first on /Film.