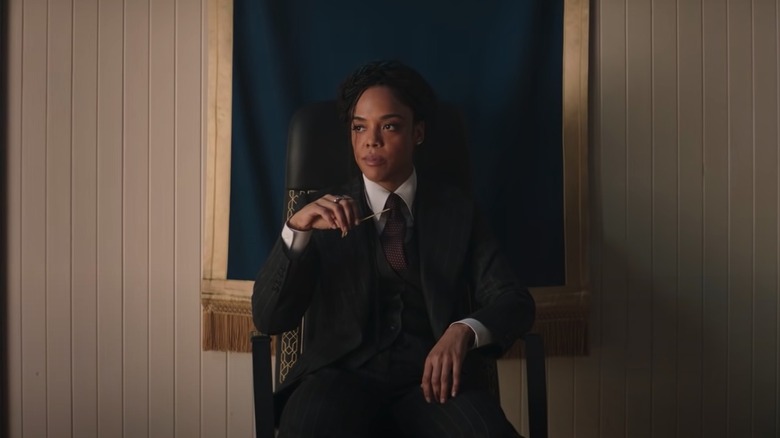 “Thor: Love and Thunder” is coming out in two months, and things are changing for our Asgardian heroes. Thor (Chris Hemsworth) is trying to hang up (or at least plant) his weapon Stormbreaker and move on. A new hero in the form of Jane Foster as the Mighty Thor (Natalie Portman and her arms) is worthy to wield Mjölnir, and Korg (Taika Waititi) has fancy new pants. One person who doesn’t seem to be happy about the changes, though, is Valkyrie (Tessa Thompson).

The Norwegian city of Tønsberg is now New Asgard, and Valkyrie is the Asgardian king. Now, it’s one thing to be fighting for freedom, to save the world from destruction, and battle monsters and gods. It’s quite another to be bogged down in the bureaucracy of government. With the surviving members of another planet and civilization claiming to be a country, one that is clearly a very popular tourist destination going by the number of ships in their harbor, there is some paperwork to be done. When you are Valkyrie, legendary warrior of legend, even with Miek (voice of Stephen Murdoch) as a helper, this isn’t going to give you the battle feels. (I think she’s eating an olive or a cocktail onion off a toothpick, going by the martini glass next to her, and I don’t blame her one bit.) It’s hard to imagine her negotiating docking rights for cruise liners without using her dagger.

Director Taika Waititi spoke to Entertainment Weekly about the upcoming film, and spoke about Valkyrie’s new role as King of Asgard. He said:

She’s got to do all the things that they never tell you about when you’re supposed to rule the people, which is deal with all of the infrastructure and figure out the economy and have delegates visit from other countries. So, she’s spending a lot of her time not fighting, and all of her new battles have to do with ruling her people.

That sounds boring and miserable, and I’m absolutely dying to see how Thompson’s Valkyrie says all the wrong things, insults foreign dignitaries, and drinks her way through meetings. (She certainly drank a whole lot in “Thor: Ragnarok.”) Is it wrong that I sort of hope she throws her Dragonfang sword across that table full of bureaucrats and scares the heck out of them.

Also, may I just say that Tessa Thompson wears the hell (Hel?) out of that suit?

The post Thor: Love and Thunder will See Valkyrie Facing Her Biggest Challenge Yet, and It Sounds Hilarious appeared first on /Film.

/Film – ‘Slash Film: Thor: Love And Thunder Will See Valkyrie Facing Her Biggest Challenge Yet, And It Sounds Hilarious’
Author: Jenna Busch
Go to Source
May 11, 2022

‘Slash Film: Every TV Show That Just Got Canceled’