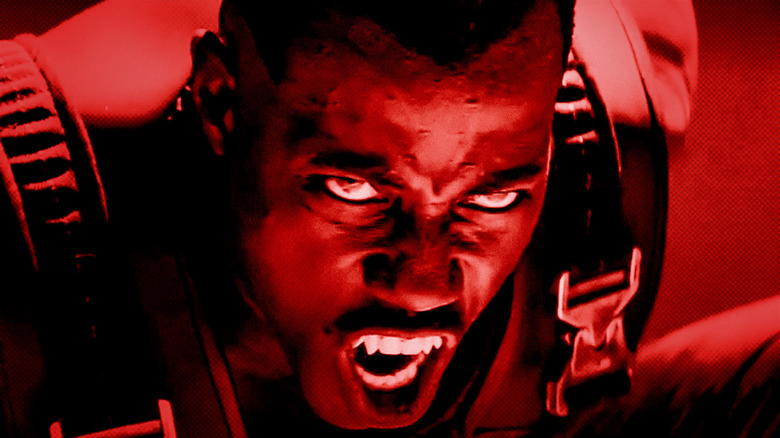 Making any movie is a challenge, but things get extra tough when the star doesn’t want to cooperate. Few shoots have been as infamously troubled as “Blade: Trinity,” the third installment in the “Blade” trilogy. The 2004 action-horror was directed by David S. Goyer, who wrote all three “Blade” films. Unfortunately, Goyer and star Wesley Snipes didn’t get along, and their on-set feud became the stuff of legend.

Allegedly upset with the production over its lackluster Black representation, Snipes would only communicate with Goyer via Post-it notes, signing them in character as Blade. According to some of his fellow cast members, including comedian Patton Oswalt, Snipes also only appeared on-set for close-ups and let his double shoot most of his scenes — and when he did show up, he was often completely stoned from smoking weed all day. That’s one way to make a movie, but it’s not exactly productive.

So, what happened on the set of “Blade: Trinity” to make it all go so wrong? 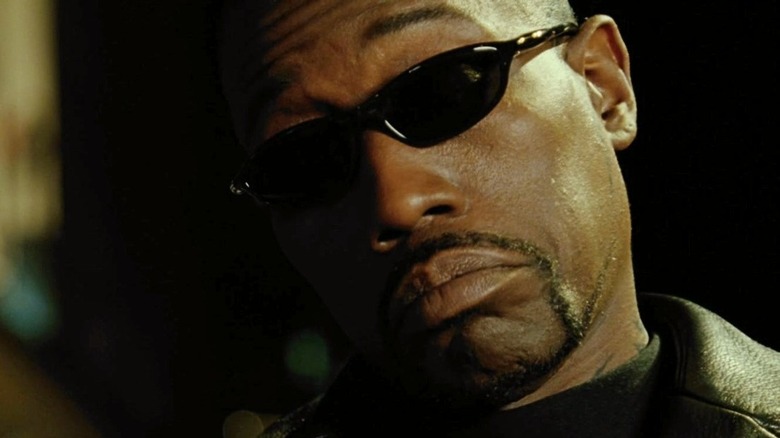 “Blade Trinity” introduces movie fans to the Nightstalkers, a group of vampire hunters that includes Ryan Reynolds as Hannibal King, Jessica Biel as Abigail (the daughter of Kris Kristofferson’s Whistler character from the first two films), and many more. One member of the team, the researcher Hedges, was played by Patton Oswalt. In an interview with the AV Club in 2012, Oswalt detailed the chaotic shoot and explained what kicked off the feud between Snipes and Goyer:

“I remember one day on the set — they let everyone pick their own clothes — there was one Black actor who was also kind of a club kid. And he wore this shirt with the word “Garbage” on it in big stylish letters. It was his shirt. And Wesley came down to the set, which he only did for close-ups. Everything else was done by his stand-in. I only did one scene with him. But he comes on and goes, “There’s only one other Black guy in the movie, and you make him wear a shirt that says ‘Garbage?’ You racist motherf***er! And he tried to strangle the director, David Goyer.”

According to Oswalt, Goyer was worried about more on-set violence, so he hired a bunch of bikers at a bar to escort him the next day and serve as his bodyguards. This led to a sit-down between Goyer and Snipes that ended with the star so furious that he only communicated via Post-it notes for the rest of the shoot. In an interview with Vice in 2018, Snipes confirmed that he did, in fact, use sticky yellow paper to talk with his director. 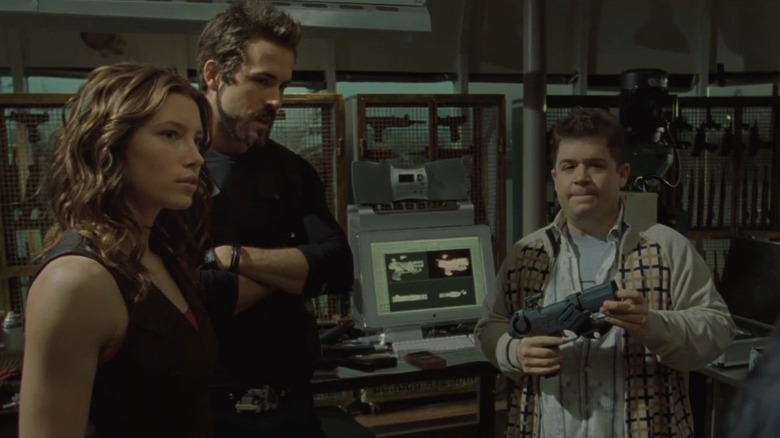 In his interview, Oswalt also said that Snipes stayed in character at all times, and that he only interacted with “Blade,” never with Snipes. Oswalt explains: “When I met him I was like, “Hi!” And he was like, ‘I’m Blade.'”(In his Vice interview, Snipes denied that he stayed in character for the entire shoot, and questioned Oswalt’s knowledge of method acting.) According to Oswalt, Snipes stayed in his trailer smoking weed for most of the shoot, leaving the rest of the cast to their own devices. Goyer encouraged the cast to ad-lib their lines, and much of Reynold’s sass is a result of performing with either Snipes’ stand-in or with Snipes himself not reacting at all. While it served as a good test run for Reynolds to figure out his Deadpool-style humor, the final result is a total mess of a movie.

One of the redeeming qualities of “Blade: Trinity” is that most of the cast seem like they’re having a great time. Biel, Reynolds, Oswalt, and others lean into the silliness of it all. Oswalt shared their way of dealing with the challenging shoot, saying:

“We would all just think of things for him to say and then cut to Wesley’s face not doing anything because that’s all we could get from him. It was kind of funny. We were like, “What are the worst jokes and puns that we can say to this guy?” And then it would just be his face going, ‘Mmm.’ ‘Smiles are contagious.’ … That was an example of a very troubled shoot that we made fun.” 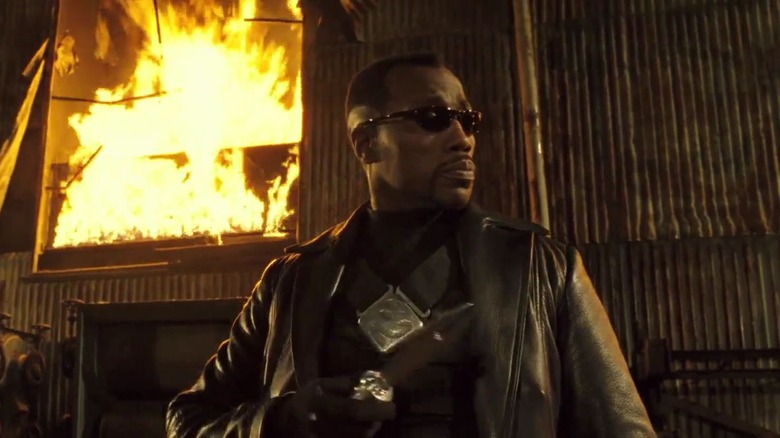 In April of 2005, just a few months after the theatrical release of “Blade: Trinity,” Snipes sued New Line Cinema, Goyer, and executive producer Toby Emmerich. The suit sought more than $5 million in damages. According to Variety, the suit alleged that Snipes was not given input on the director, cast, and screenplay, which was in violation of his contract. He asserted that he was harassed and defamed because of his race, and also claimed that efforts to select a diverse cast and crew were thrown by the wayside, with the production instead hiring only white people, which led to “feelings of isolation and exclusion” in Snipes.

Snipes’ main complaints with the “Blade: Trinity” script were the humor, which he found to be juvenile, and the fact that the focus was less on Blade and more on the Nightstalkers. He believed the real purpose was to set up spinoffs featuring Biel and Reynolds’ characters, which rubbed him the wrong way. Nothing ever came of the lawsuit.

Snipes had his own problems with the law, leading police on a high speed chase in 1994, being fined several times for misdemeanor weapons charges, and spending three years in prison for failing to pay his taxes before being released in April of 2013.

A Difficult Shoot That Was Impossible To Cover 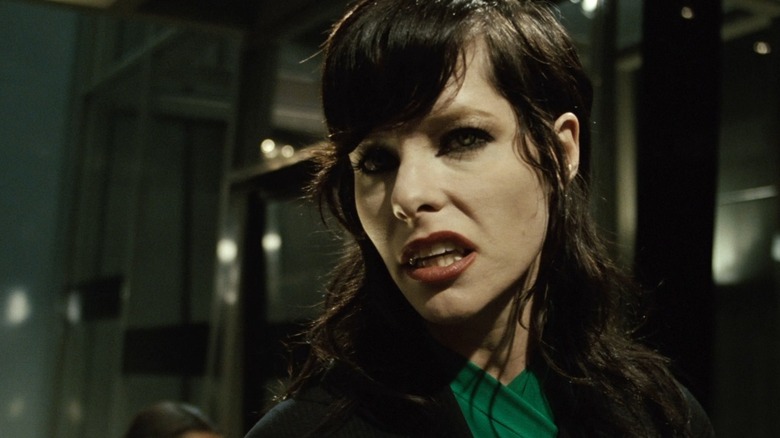 Chris Parry, a journalist for Spin, was sent to visit the set for an article. The piece ended up getting canned, due in part to Snipes refusing to cooperate, but after news of the lawsuit broke, Parry shared an account of his experience with Snipes. He included anecdotes from the Vancouver crew, detailed his own challenges with Snipes, and asked some of the other stars about his behavior. Reynolds called him “intense” and “method and s***,” while Biel noted that she was pretty sure he was always in character. Parker Posey, who is clearly having a ball onscreen as the vampire Danica Talos, shared her co-stars’ sentiments:

“I came here to do something fun and stupid and big budget and I don’t normally get to do that kind of thing. Don’t have the boobs for it, you know? So I’m just showing up, saying my lines, having fun with it. And Wesley isn’t.”

Snipes apparently refused to do any interviews for the movie, save one he did with comic book collecting bible Wizard Magazine on the very first day of shooting. Parry’s account is scathing, but it’s nothing compared to Goyer’s version of events.

The Director And The Vampire-Hunter 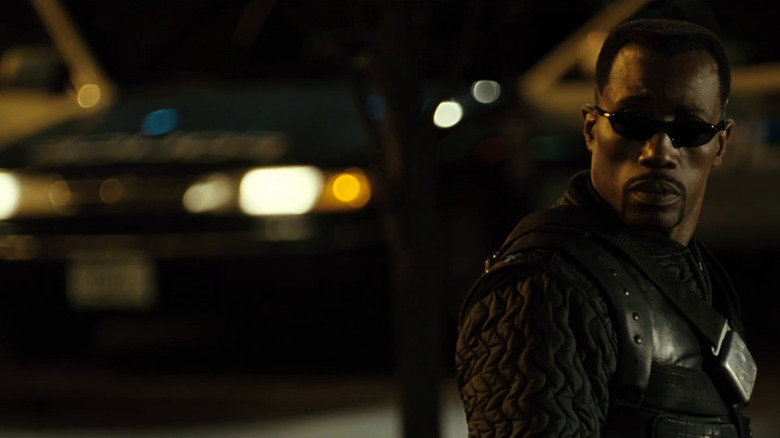 In an interview with Uproxx in 2016, Goyer said that he didn’t think he would ever do another “Blade” film, describing the production of “Blade: Trinity” as “the most personally and professionally difficult and painful thing I’ve ever been through.” He said that he hasn’t spoken to Snipes since, though Snipes told Vice that he was sure they had talked at some point. The good news, at least, is that Snipes doesn’t hold any grudges about the situation:

“I don’t fault him. I don’t fault anybody. That’s just what it was, man. Nobody thought that the Blade stuff was gonna pop off in the first place. It was an anomaly. All of it was an anomaly. It just happens over time. Nobody knows who was the one who struck gold, but everybody claims it. So, he did what he had to do. We did what we did based on what we knew at the time and that was the way it was. It’s a wonderful thing where you can look back and say, hey, at the end of the day we still did something great. Great people, great talent, great future. We laid the foundation for something bigger than we even imagined. That being said, we were the products of those that laid the foundation for us. So, hakuna matata.“

It turns out that the only thing crazier than a motherf***er trying to ice skate uphill was trying to get a performance out of an uncooperative Wesley Snipes … but somehow, “Blade: Trinity” still released and now has a small cult following. Here’s hoping filming Marvel’s upcoming “Blade” movie with Mahershala Ali goes a little more smoothly.

The post Wesley Snipes Famously Refused to Film Most of His Blade: Trinity Scenes appeared first on /Film.