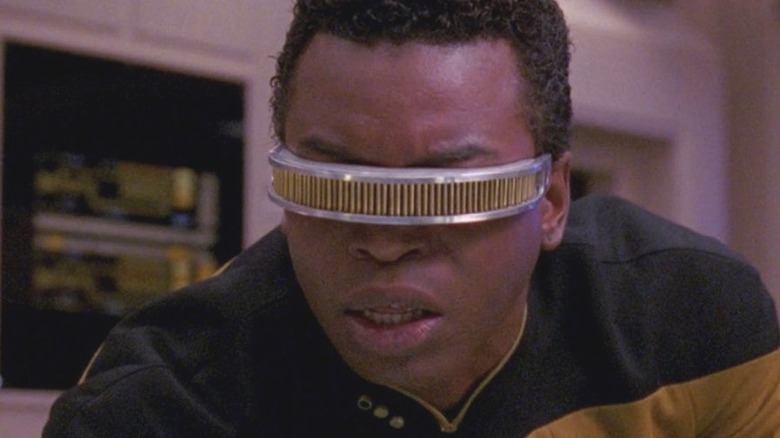 Lieutenant Commander Geordi La Forge from “Star Trek: The Next Generation” ranks among LeVar Burton’s most iconic roles, but the character’s instantly recognizable VISOR was a literal pain for the actor. The ocular device was one of the many advanced technologies in “Star Trek,” letting the blind Geordi receive visual information through the electromagnetic spectrum. Geordi’s VISOR became one of the defining symbols of not only the character, but all of “The Next Generation.”

The mechanism lets LaForge identify energy wavelengths far beyond normally visible frequencies, turning his handicap into an asset and allowing him to identify visual details that most other people could not. The device is especially useful in analyzing the sort of high-tech environment that a Chief Engineer like Geordi needs to be familiar with. To this day, fans try to recreate the famous look in cosplay.

Ironically, though, La Forge could see on the Enterprise far better than Burton could on set. 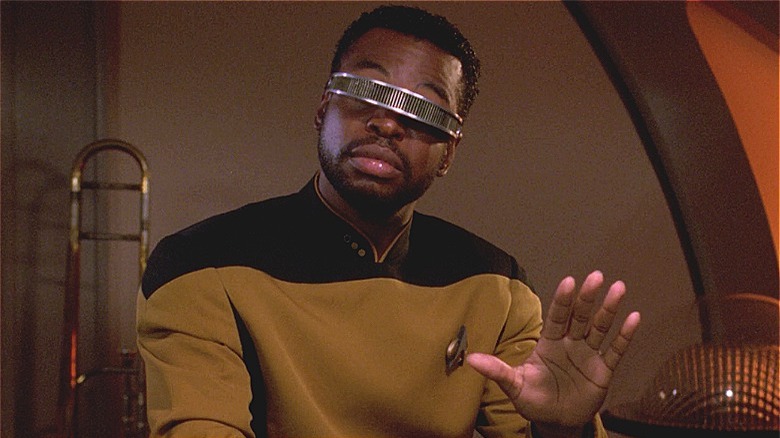 In a bit of a comical twist, the real-life VISOR prop obstructed LeVar Burton’s sight to the point of near-blindness. In an interview with Alibi, Burton described his experience:

“People always ask me, ‘Could you see out of that thing?’ And the answer is, no, I couldn’t. It was always very funny to me because when the actor puts the visor on 85 to 90 percent of my vision was taken away, yet I’m playing a guy who sees more than everyone else around him. So that’s just God’s cruel little joke.”

The VISOR was especially disorienting during the first season, when the “Reading Rainbow” and “Roots” star was getting used to navigating and before the crew made modifications to the prop. Burton explains in another interview with the BBC that he was constantly stumbling around the set:

“I bumped into everything the first season — light stands, overhead microphones, cables at my feet — I tripped over it all, I walked and sometimes ran into walls and pieces of set. It was really, really hard.”

Tired Of The Pain 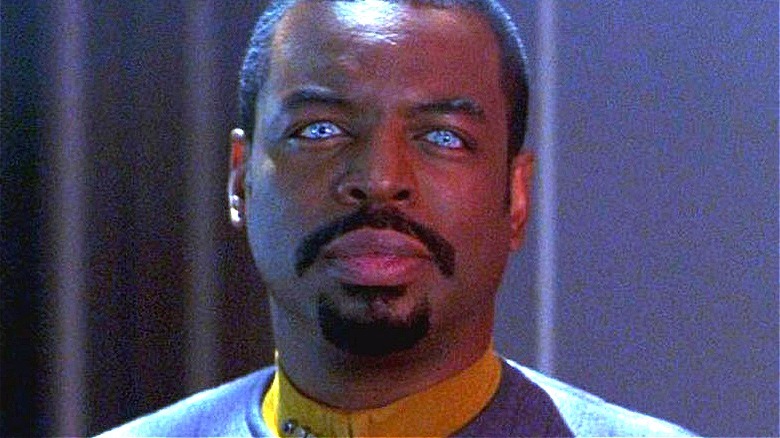 The blindness was just part of the problem for poor Mr. Burton, who also experienced daily headaches due to the way the VISOR attached to his head. The prop’s mechanisms squeezed Burton’s temples, giving him pain to accompany his visual impairment. He mentions in the Alibi piece:

“It’s sufficient to say there was pressure applied through a mechanism of flanges and screws that put pressure on my temples. So after about half an hour, I’d get a headache.”

The headaches at least were more in line with Geordi’s character, unlike Burton’s actual blindness. There’s a part in the very first episode of the series, “Encounter at Farpoint,” when Geordi mentions to Dr. Beverly Crusher that the VISOR’s stimuli interfere with his natural senses and cause him persistent pain. It’s fun to think about how much frustration Burton was channeling in that particular delivery.

The actor was eventually so frustrated, in fact, that he insisted on Geordi switching to ocular implants for the film “Star Trek: First Contact.” After all, in the technologically sophisticated world of “Trek,” it only makes sense that the Federation’s scientists would eventually develop a less obtrusive way of letting the blind Geordi see, as Burton explained to Rolling Stone:

“…Geordi’s visor was a shorthand language of communicating the technological sophistication of the 24th century. I learned to be OK with that, until I wasn’t. We did seven years and one movie [1994’s Star Trek Generations]. After that, I was done. I was tired of having my eyes covered and was really insistent. We found a way, as I always knew we could, to shrink that technology into an ocular implant.”

LeVar Burton’s natural charisma and likeability lent an everyman quality to the Enterprise’s Chief Engineer, a trait that seemed to encourage the writers of TNG to repeatedly expose him to all sorts of danger and stress. In real life, Burton was similarly (and, in hindsight, somewhat humorously) suffering behind his prop technology.

The post What LeVar Burton Could (And Couldn’t) See When He Put On His Star Trek Visor appeared first on /Film.

/Film – ‘Slash Film: What LeVar Burton Could (And Couldn’t) See When He Put On His Star Trek Visor’
Author: Andrew Housman
Go to Source
January 15, 2022

‘Coming Soon: HBO’s The Last of Us Adaptation Casts Riley’