Marvel will soon be expanding the roster of green superheroes in the Marvel Cinematic Universe with a She-Hulk series coming to Disney+ sometime in 2022. Orphan Black star Tatiana Maslany is taking the title role, which is the alter ego of lawyer Jennifer Walters, who suddenly becomes a a large, powerful, green-hued version of herself after receiving an emergency blood transfusion from her cousin, Bruce Banner (Mark Ruffalo), AKA The Incredible Hulk.

Unlike the original version of Hulk, the transformation of Jennifer Walters into She-Hulk isn’t quite so debilitating, leaving her with her intelligence and emotional control. But she’s still susceptible to bouts of rage, and anger increases her strength, which could become an issue when she’s at her day job: representing superhumans in court.

However, there’s another problem She-Hulk will have to deal with in the form of a super strong villain known as Titania. Who is the She-Hulk villain? Let’s find out. 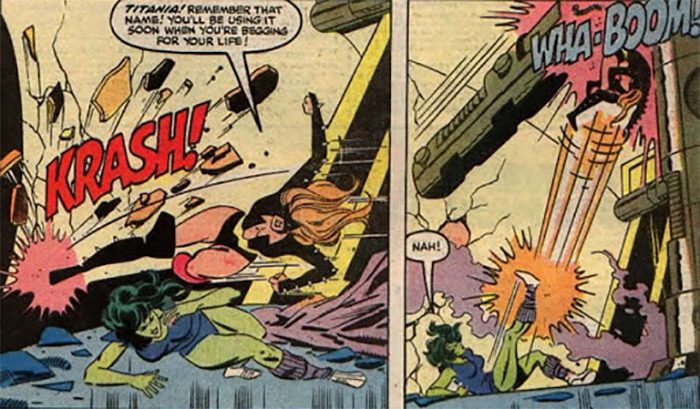 When Did Titania Debut in Marvel Comics?

Titania, AKA Mary MacPherran, first appeared in Secret Wars #3 in July of 1984 as part of the crossover limited series unfolding in the Marvel Comics universe. She was created by then-Editor-in-Chief Jim Shooter, who used real-life Marvel production assistant Mary MacPherran as inspiration for Titania’s original identity. Shooter confirmed as much in a blog post back in April of 2019, writing:

“Wonderful, gentle, sweet Mary Mac was indeed a smidgen of the basis for Titania, who was a willowy young woman who became uber-robust and Hulk-level strong.”

There is another Titania in Marvel Comics who debuted before Mary MacPherran, a female wrestler who was a member of The Grapplers and was murdered by The Scourge of the Underworld, a vigilante known for killing super villains. But the Titania known for battling She-Hulk is an entirely different character. 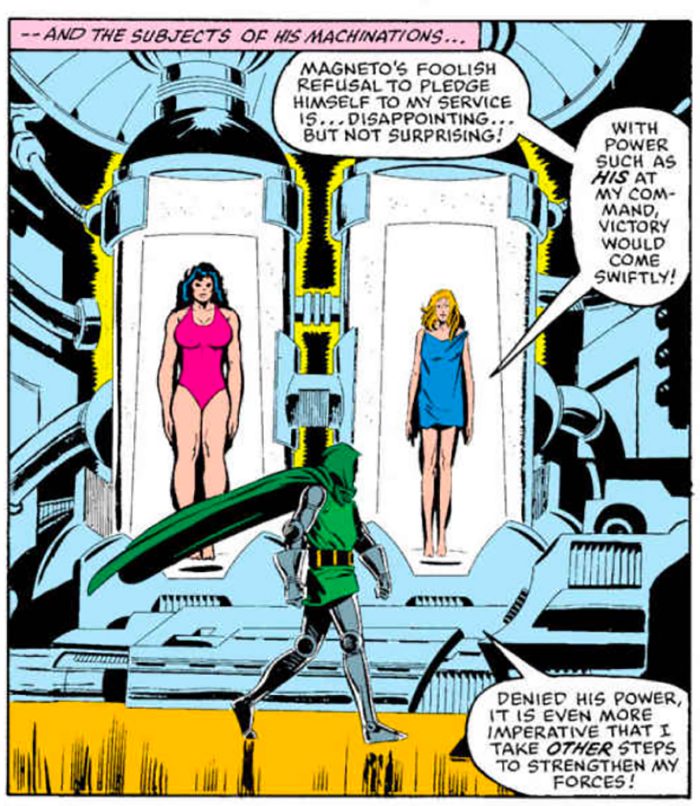 What is Titania’s Origin Story?

Mary McPherran was a scrawny girl in high school who was constantly bullied by a wealthy peer named Vanessa Ashwood while growing up in Denver, Colorado. Mary had a great admiration for superheroes, wishing that one day she could have superpowers, not only so that she would be admired, but so she could get revenge on those who made her life a living hell.

Mary sees an opportunity to gain some popularity when Spider-Woman (the Julie Carpenter version) arrives in town. Mary’s friend Marsha Rosenberg notices that Spider-Woman has the same reddish-blonde hair as Mary, and the meek young woman uses this as an opportunity to falsely claim that she’s actually Spider-Woman. Marsha can’t keep her big mouth shut, and eventually Vanessa finds out this secret, prompting her to invite Mary to a party with her rich friends and giving the bullied girl the popularity that she’s craved for so long.

However, the lie doesn’t last very long. Suddenly, part of Denver is torn from Earth and becomes part of the composite planet known as Battleworld. Created by the cosmic entity Beyonder, this amalgamation of various planets is used as a battleground for superheroes and supervillains to fight each other. Spider-Woman shows up to save the day, immediately ruining Mary’s false claim, prompting Vanessa and her stuck-up friends to chase Mary and Marsha through Battleworld. Because if there’s one thing that’s important when your residence has been turned into a composite planet used for superpowered fights, it’s holding someone accountable for a stupid lie.

While Mary and Marsha are on the run, they are discovered by Doctor Doom, who just so happens to need more superpowered individuals to help with his villainous ambitions. Tempted by a promise of becoming powerful, the two women agree to join Doctor Doom’s nefarious plans. Using energy from an alien storm, Doom turns both of the women into superpowered beings. While Marsha becomes the fiery villain known as Volcana, Mary suddenly becomes taller, muscular, and of course, more buxom (seriously, this was and remains an eye-rolling issue with comic characters). With a newfound confidence, she takes on the name Titania and becomes a formidable foe for various Marvel superheroes.

What Are Titania’s Superpowers?

Like many superheroes from older Marvel Comics, Titania has powers that are very similar to that of her rival, She-Hulk. Titania has immense physical strength that makes her nearly as tough as She-Hulk. Her body is extremely resistant to injury, which allows her to endure extreme temperatures and withstand severe physical trauma. Like many superheroes, Titania also has high endurance and stamina. But perhaps her greatest superpower is getting her ass kicked by She-Hulk. 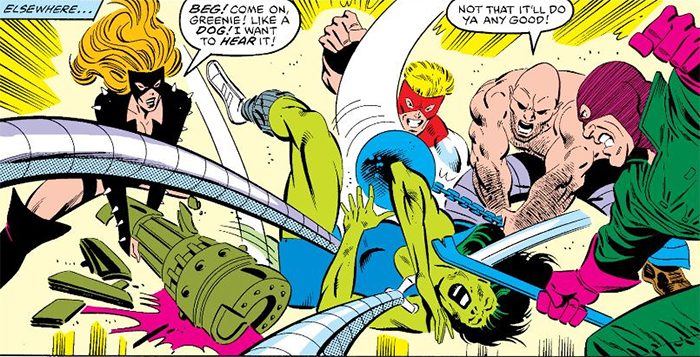 When Did Her Rivalry with She-Hulk Begin?

Titania first encountered She-Hulk during Secret Wars while serving as a villain for Doctor Doom. During a battle, Titania actually triumphed over She-Hulk. However, it wasn’t exactly fair since it happened during a gang beating. But Titania would face She-Hulk many times in future issues of Marvel Comics. There’s even an instance where she tries to get the best of She-Hulk by using one of the Infinity Stones to give her even more strength. But she still ends up thwarted by She-Hulk, continuing a streak of defeats.

Who Is Playing Titania?

Jameela Jamil has been cast as Titania, though we’re not sure if she’ll be taking on the same alter ego of Mary McPherran. You might know Jameela Jamil as the high class, celebrity name-dropping socialite Tahani Al-Jamil from NBC’s The Good Place. She’s also the host of the TruTV game show The Misery Index featuring the Impractical Jokers, and she’s lent her voice to animated shows such as American Dad!, Crossing Swords, Harley Quinn, Jurassic World: Camp Cretaceous, and the new Animaniacs.

Jamil is known for being an advocate for body positivity and constantly speaking out about how women are treated in the media. She’s even gone so far as to label certain female celebrities as “double agents of the patriarchy” for promoting unhealthy body image. That includes a firm stance against airbrushing of editorial images, which she refuses to have done to any of her photoshoots for magazines.

Knowing this about Jamil, it’s easy to see why a role like Titania might appeal to her. Perhaps the character is a woman disregarded for not living up to the standards of others. After all, both Mary McPherran and Jennifer Walters were “meek” women before they become super strong versions of themselves. The difference is She-Hulk chose to use her power for good, and Titania used it for evil. Perhaps Jamil’s character is pushed too far by the standards of society, and when she finally lives up to them by becoming this incredibly strong woman, she decides to teach those who disregarded her a lesson.

How Could Titania Fit into the Marvel Cinematic Universe?

This is where things get tricky. There’s not much of anything in Titania’s comic book history that easily fits into the premise of Marvel’s She-Hulk series. The show has been described as a half-hour legal comedy where Jennifer Walters defends superhumans in court. So our best guess is that Titania could end up being a rival lawyer who is constantly battling with She-Hulk in the courtroom. But that’s not all that thrilling for a Marvel Studios series.

Another approach to the character could have Titania being a lawyer who’s jealous of She-Hulk’s work with superheroes. Perhaps after learning how Jennifer Walters became She-Hulk, Jameela Jamil’s character tries to replicate that origin story for herself. Since it’s probably not easy to get Hulk’s blood, maybe she gets her hands on blood from The Incredible Hulk villain Abomination, who has been reported to be making a surprising comeback in the She-Hulk series.

Further down the road, Titania could also have a part to play in Marvel’s future series Armor Wars. In Marvel Comics, Titania gets incarcerated in a superhero prison known as The Vault, which is patrolled by Guardsmen. These are prison wardens with enhanced armor based on stolen Iron Man suit designs. In the Armor Wars storyline, Tony Stark sets out to destroy any armored warrior who is suspected using his designs for their own technology. When Tony Stark destroys the Guardsmen technology, Titania escapes.

We’re not sure how the Armor Wars storyline is going to play out in the Marvel Cinematic Universe, especially since Tony Stark is dead. Maybe it will be James “Rhodey” Rhodes (Don Cheadle) as War Machine who is tasked with stopping a spread of stolen Iron Man technology. He could even be joined by Ironheart since the young, female version of Iron Man is also getting her own Marvel series in the future. Perhaps Guardsmen are introduced at The Raft prison we’ve already seen in the MCU, which is where someone like Titania could end up after being defeated by She-Hulk. The Armor Wars series could let her escape, setting up a future confrontation somewhere down the line.

She-Hulk is expected to arrive on Disney+ sometime in 2022. Stay tuned for more.

The post Who is the Main ‘She-Hulk’ Villain? Titania Explained appeared first on /Film.