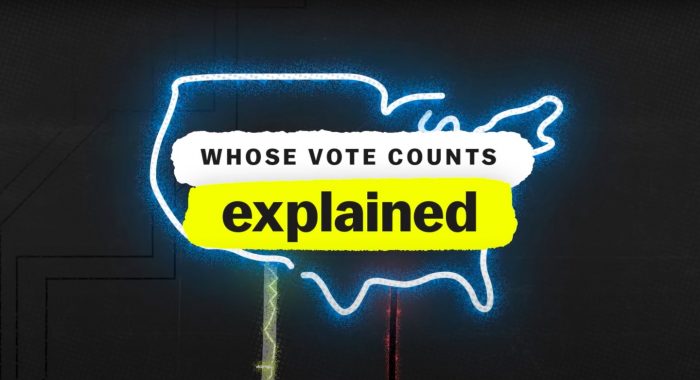 You’ve probably heard the resounding instruction plenty of times by now: vote. The U.S. presidential elections are coming this November, and it’s tantamount that you vote. But why are all these Hollywood celebrities encouraging you to vote? Why the urgency around it? That’s a bigger and more complicated question than can be answered in a short internet blog, which is why Vox has produced a Netflix docuseries called Whose Vote Counts, Explained, which dives into the deep and messy history of voting in the U.S., and who can rig it. Watch the Whose Vote Counts, Explained trailer below

Vox and Netflix pulled out the big stops for the new documentary series Whose Vote Counts, Explained, an election-themed limited series which explains the voting system in the U.S. and dives into hot-button topics like voter suppression and voter fraud, the latter of which has been (misleadingly) bandied around a lot by our current president.

High-profile celebrities like Leonardo DiCaprio, Selena Gomez, and John Legend narrate Whose Vote Counts, Explained, to speak about onging fears about the voting process being rigged — either by powerful donors and corporations — as well as concepts like gerrymandering, the Electoral College, voter suppression, fraud at the ballot box, and the ways votes are counted. This marks third time that DiCaprio and Gomez have signed on to serve as a narrator, who have previously worked on other documentaries such as 2007’s The 11th Hour and 2019’s Ice on Fire; and 2013’s Girl Rising and 2015’s Unity, respectively.

Hollywood celebrities have been coming out in droves to encourage people to vote lately, with those “register to vote” videos reaching an apex on National Voter Registration Day earlier this week. Whose Vote Counts, Explained isn’t the only project that dives deep into the U.S. voting system — on Tuesday, Amazon made available for free its original documentary All In: The Fight for Democracy, directed by Liz Garbus and Lisa Cortés, which examines the history and ongoing effects of voter suppression in the United States. It’s clear there’s a more concerted effort than ever to get people to the polls and, hopefully, change things.

Here is the synopsis to Whose Vote Counts, Explained:

The right to vote is at the foundation of America’s democracy. But not every vote is created equal. How does the system work, and can it be fixed?

The election-themed limited series will be available for streaming on Monday, September 28, 2020 nearly a week after the National Voter Registration Day.

When deeds and words are in accord, the whole world is transformed.