Zack Snyder is raising an Army of the Dead, and it’s shambling onto Netflix this spring. The streamer has set the official release date, which it announced via a nifty first teaser poster. See the Army of the Dead poster below. 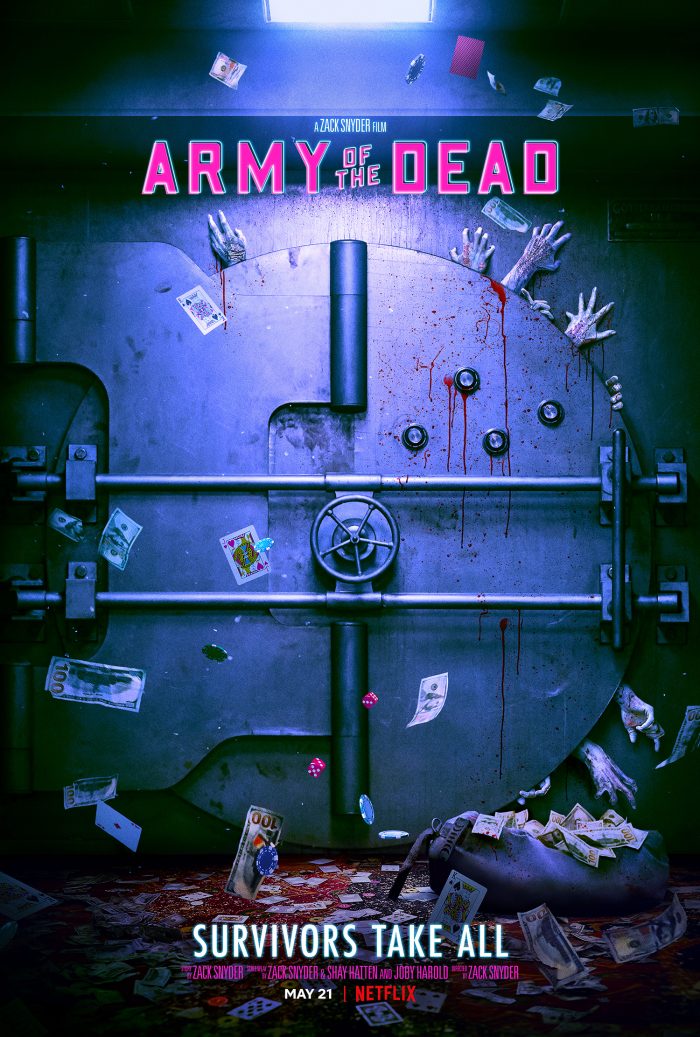 Army of the Dead will premiere on Netflix on May 21, 2021, Netflix announced, revealing a teaser poster that shows a bloody vault full of money and playing cards, with dozens of zombie hands reaching through the cracks. The movie tagline “Survivors take all” is a zombified play on the gambling term “Winner takes all” — because we’re in Las Vegas, get it?

Per the logline for Army of the Dead: “Following a zombie outbreak in Las Vegas, a group of mercenaries take the ultimate gamble, venturing into the quarantine zone to pull off the greatest heist ever attempted.”

“Greatest heist ever attempted” is certainly a big claim, but this also comes from a director who promised his own movie will be a “full-blown, balls-to-the-wall zombie heist movie.” But then again, maybe the phrase “zombie heist movie” is all the explanation you need to tune into Army of the Dead.

Zack Snyder directs and co-writes (alongside Shay Hatten and Joby Harold) Army of the Dead, a movie that appears to be exactly what it says on the tin: a team is assembled to infiltrate a Las Vegas casino amid the zombie apocalypse. The film takes place after a plague has been released from Nevada’s Area 51 and the U.S. government barely manages to contain by building a wall around Las Vegas, which has become overrun with zombies.

Army of the Dead will be accompanied by an international multi-language prequel movie directed by cast member Matthias Schweighöfer, which will follow his own character Ludwig Dieter, as well as an anime series Army of the Dead: Lost Vegas, which will focus on the origin of Dave Bautista’s character Scott as he and a rescue crew (Ana de la Reguera, Tig Notaro, Omari Hardwick and Ella Purnell reprising their roles) try to navigate the mysterious beginning of the zombie outbreak in Vegas.

‘The Medium’ Recoups Development Costs Only Days After Release