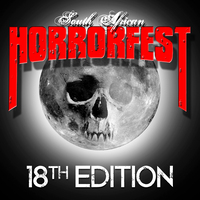 After an unforeseen scheduling setback our friends at the South African Horrorfest picked up their bootstraps and were able to reschedule their annual event for this coming week and a half. While its always nice to be able to hold your event prior to Halloween, during spooky season, we don’t think anyone will complain about carrying on the festivities after the hallowed days.

This year’s festival includes such titles as pnademic-era horror The Harbinger, the documentaries King of Screen and Life With Chucky, exploitation flicks like Mad Heidi and Troma’s Eating Miss Campbell. Classic horror flicks Nosforatu, Dracula and The Rocky Horror Picture Show are also in the mix this year. There will also be a sizeable streaming program for those who will not be able to attend in person this year.

In cinema at The Labia Theatre, Cape Town

& Streaming Across SA via Quicket

Surviving the pandemic and making international “Best Horror Film Festival” lists like that of US publications Movie Maker Magazine and Dread Central, the South African HORRORFEST enters its 18th edition!

(This year the original Halloween-season dates have moved on a touch, to 18 – 30 November)

Again bringing Horror fans an amazing batch of new, indie, rare, classic movies and short films from around the world (which they’re unlikely to see anywhere else in the country), in cinema and streaming.

Near all of the new releases will have their Africa / South Africa premiere at the HORRORFEST.

A dozen in-cinema shows will screen at the SA HORRORFEST’s long standing venue partner, The Labia Theatre in Cape Town (where your drink from the bar can be taken into the cinema), while those outside of the city and across the rest of South Africa can also access the event with the streaming option consisting of 11 movies and 5 short film collections (via Quicket).

The festival opens with the return of the silent film soundtrack performance, for an in-person show of the Makabra Ensemble’s live score for Nosferatu’s centenary screening ; there’s a special 16mm projection of Bela Lugosi’s classic Dracula ; a Rocky Horror Picture Show audience participation screening ; South African feature film Pou with cast & crew attending for a Q&A ; 4 documentaries include subjects like Stephen King and Chucky ; Horror / Fantasy literature fans will get another dose of authors reading from their original work (streaming at the YouTube channel’s Bloody Parchment playlist – https://www.YouTube.com/TheHorrorfest ), and much more.

Watch all movie trailers at The Horrorfest channel : https://www.YouTube.com/TheHorrorfest (subscribe while you’re there and hit notifications to stay in the loop when all new content gets added, including movie reviews by festival creators Paul Blom and Sonja Ruppersberg).

An intriguing blend of the pandemic era with demonic forces

Documentary on the legacy of this killer doll

Troma madness, not for the easily offended

GHOSTS OF THE OZARKS

Almost too unique a concept to describe!

A LIFE ON THE FARM

5 feature length volumes of innovative, ambitious, unique and mind-blowing shorts from all parts of the globe, compiled into 5 streaming volumes, including:

See you at the movies! (or in the stream)

‘Slash Film: Man Who Inspired Steven Spielberg’s The Terminal Dies At The Airport Where He Lived’