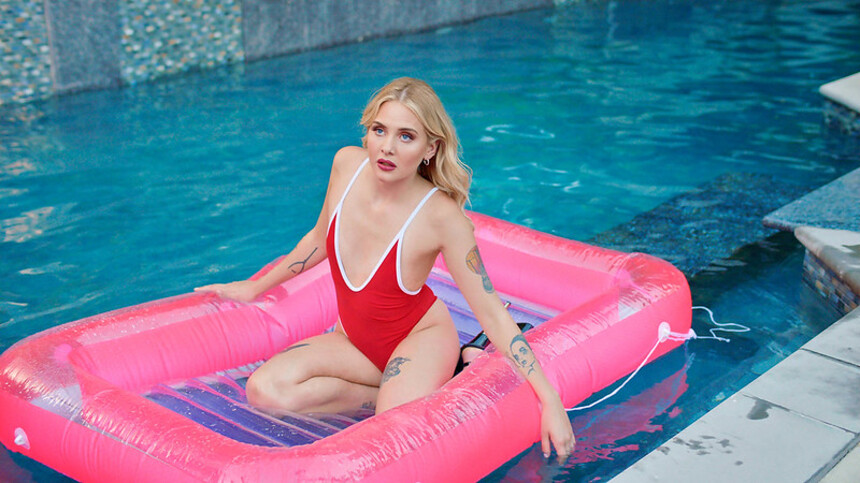 The feature debut Pleasure by Swedish writer-director Ninja Thyberg (co-written by Peter Modestij) takes a singular POV look at what it means and takes to ascent in the ranks of professional adult performers. However, Thyberg´s bona fide depiction of the industry is framed by the laborious strife of a debuting actress to gain agency in a male-dominated and abused environment.

Seasoned colleagues, as there are only men on the set, understand the situation and freely reassure Bella that this happens to all newcomers and she doesn’t have to be afraid. Soon enough, the camera rolls. Once her debuting act is wrapped, the crew festoons her with compliments that she put on a performance like a pro. The confidence boost sets Bella on a new career trajectory.

Yet she is there to defy norms, not to affirm conventions. Thyberg seems to adhere to widely-known cautionary tales by performers chewed and spit out by the business only to skillfully outmaneuver those assumptions to deliver a compelling and gripping story. Bella is not going to be the next big cautionary tale.

Yet the two films differ in aesthetics and the message, as they see the protagonists at opposing ends of their careers. Most importantly, Thyberg empowers her protagonist to challenge the oppressive conditions of established power structures and regain agency for herself in the business that grew to play by different rules.

Swedish newcomer Sofia Kappel, as the leading actress in the role of Bella Cherry, excels in a breakout performance. Witnessing what Bella Cherry has to endure in her rise to stardom in adult entertainment, Kappel´s achievement is even more remarkable given the fact that this is her first acting role.

Thyberg and Kappel demonstrate in vivid detail that personal responsibility, tenacity against the odds, and the will to make sacrifices are mandatory components in the process. Contrary to film convention, no feel-good upbeat montage that would distill all the hardship into a 20-second music clip appears in the film, as Thyberg pulls no punches and keeps the experience intensive and truthful all the way.

In addition, a caring pep talk from Jessica’s mom provides comic relief and an emotional moment. After an exceptionally excruciating shoot, Jessica is contemplating leaving Bella Cherry behind in L.A. and returning back to Sweden. That’s when her mother gives her an old-school motivational speech about gritting your teeth and pulling through outside the comfort zone, because that’s what is life about.

Evidently, she does this under the impression that her daughter is having problems in her job in a café, but pushes her unwillingly for even more boundary-pushing, out-of-the-comfort-zone on-camera sex stunts. And Bella learns that success, whatever it represents, can come at the cost of more than one fissure at a time.

No Big Deal, Just Jamie Foxx Celebrating With An Oscar For Pixar’s Soul

‘Slash Film: ‘The Great Gatsby’ Musical Soundtrack Will Be Written By Florence Welch of Florence + The Machine’

Tickets Are On Sale Today and ‘Godzilla vs. Kong’ Gets One More Badass IMAX Poster to Celebrate