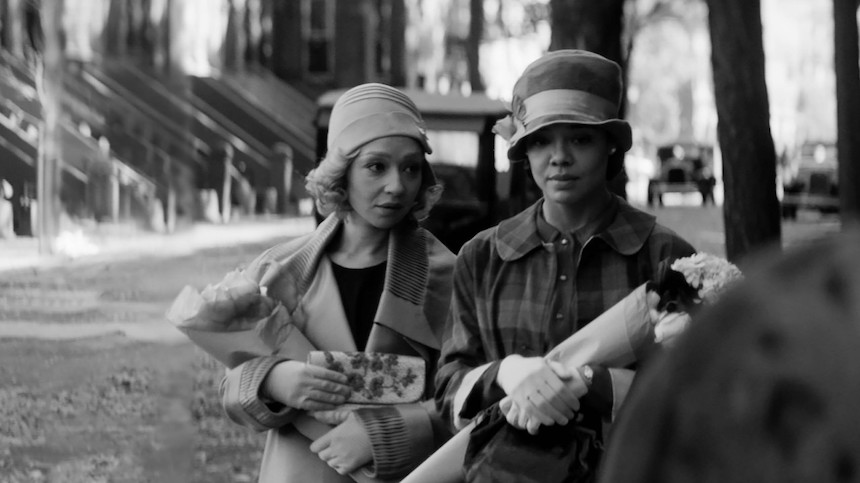 In writer-director Rebecca Hall’s (Christine, The Town, Vicky Cristina Barcelona) evocative, provocative adaptation of Nella Larsen’s richly textured, multi-layered 1929 novel, Passing, two women, one-time high-school friends, now in their thirties, inadvertently cross paths in the tea room of an upscale New York hotel. They’re both mixed-race women “passing” as white: one has done it on a lark, risking public confrontation and possible humiliation. The other has done so far more dangerously, as a life choice that’s allowed her to move effortlessly in upper-middle-class white society, marry a wealthy banker, and start a family, always with the risk that her “true” identity as a mixed-race woman will lead to an abrupt exclusion from her family and friends or worse given the virulently violent, white supremacist nature of American society at the time.

For Irene “Reenie” Redfield (Tessa Thompson, Creed, Westworld, Annihilation), occasionally “passing” as white allows her to purchase a toy for one of her sons at an exclusive, whites-only store or stepping through the doors of a high-end, midtown hotel while unsuspecting doormen and servers treat her like near royalty. Irene’s deception, however, ends there. She lives a bourgeois, materially comfortable, if emotionally constrained, life as the wife of a successful doctor, Brian (André Holland). She is mother to two preteen boys, and with the freedom afforded by having a live-in maid, spends her non-family time almost exclusively on progressive social causes. It’s a full life time-wise, but only partially fulfilling, in part because — as Hall explicitly recognizes — it’s filled with multiple, overlapping identities, some truer or more authentic than others, but each one ultimately partial and provisional, examined, critiqued, and dissected at the owner’s peril.

Irene’s counterpart and semi-doppelgänger, Clare Kendry (Ruth Negga, Loving, Preacher), escaped from an impoverished Chicago upbringing, recast herself as the white heroine in her own, fictional story, and married an unreconstructed white supremacist, John (Alexander Skarsgård). This gives her the wealth, status, and freedom that life as a poor Black woman never could. As Clare’s unexpected encounter with Irene forces her to recognize, the inauthentic (white) life isn’t worth living if it can’t be lived fully, openly, and honestly. Clare’s gravitational attraction to Irene’s life lived openly as a Black woman compels Clare to burrow into Irene’s life, causing waves of friction and conflict that all but inevitably lead to a tragic outcome.

Passing, however, remains obsessively fixated — sometimes almost to a myopic fault — on Irene and her increasingly troubled, turbulent inner life, an inner life that repeatedly expresses itself in self-destructive, passive-aggressive behavior towards Clare. Irene gradually begins to see her former friend as an unwelcome interloper in her personal and social lives, and eventually an existential threat to Irene and Brian’s marriage. She also seems an emotional scavenger who unearths Irene’s long-suppressed, long-repressed physical attraction toward Clare, compelling a reluctant Irene to question or examine the overlapping, contradictory identities that have shaped, defined, and redefined her throughout her adult life.

For Hall, adapting Larsen’s novella was more than just about bringing a long-cherished work of fiction to the silver or digital screen. It was — and is — profoundly personal, connecting Irene and Clare’s individual and collective stories to Hall’s experience as the white presenting daughter of a mixed-race woman, opera singer Maria Ewing, and a Brit Caucasian father, theater director Peter Hall. Hall’s connection to the source material, however, results in a relatively controlled, even clinical approach to exploring Irene and Clare’s complex, interlocking stories, from the decision to shoot Passing in luminous black-and-white cinematography to decision to employ a square-like aspect ratio that subtlety hems in Irene and Clare from both sides of the frame. They’re both victims of — and victimized by — a patriarchal, white supremacist system and ultimately the perpetrators of their own, singular fates.

Passing premiered at the Sundance Film Festival on January 30, 2021, and will be released on Netflix later this year.

Mel Valentin
contributed to this story.

Days After Megan Fox Denies She Made A Mask Comment Online, She’s Seen Without A Mask

Here’s What Happens If You Have Covid At Disney World