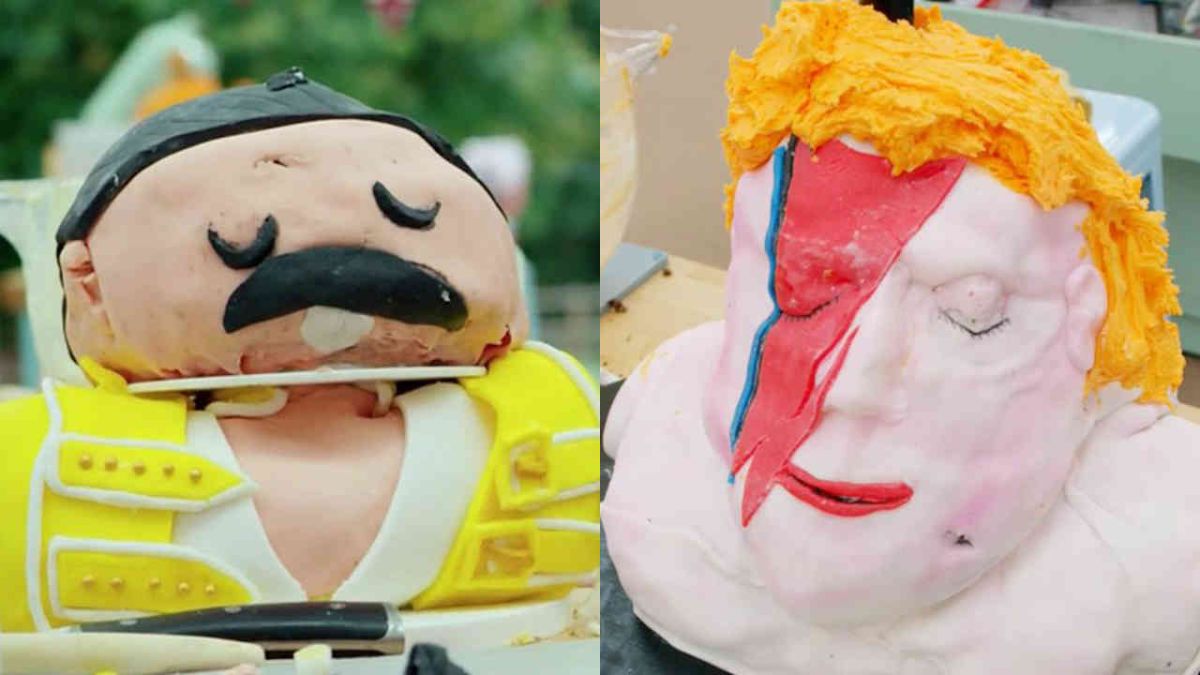 What’s the first thing that springs to mind when you think of The Great British Bake Off? Frantic amateur bakers sweating over hot ovens while Noel Fielding cracks innuendos about “soggy bottoms” and “tight balls”, right? It’s certainly not rock stars and viking metal.

But it looks like the beloved British baking show is flying its rock’n’roll flag high in 2020. In the first episode of the brand new series of GBBO, the showstopper task asked contestants to create cake-based sculptures of people they admired.

The results were interesting. And by that, we mean absolutely hilarious – to the extent that it caused a Twitter mini-meltdown.

Here’s the reaction to one brave baker’s attempt to capture the majesty of Freddie Mercury via the medium of sponge.

Another contestant’s David Bowie fared even worse – though given the end result looked like Aladdin Sane has just been giving a mullering outside the pub on a Friday night, it’s hard to argue with the reaction.

Me before lockdown v me now #GBBO pic.twitter.com/CegUUVXx7ASeptember 22, 2020

I obviously had to get my copy of Aladdin Sane out after seeing Ziggy reincarnated as a delicious cake on #GBBO pic.twitter.com/FhBLcF4Q8YSeptember 22, 2020

And then there’s the frankly terrifying cake based on former Blink-182 frontman and full time flying saucer-botherer Tom DeLonge.

hello there, the angel from my nightmare #GBBO pic.twitter.com/z3MZGEmaW8September 22, 2020

As if all that wasn’t enough, it turns one of the bakers on this year’s series is a bona fide metal fan.

In her intro tape, West Sussex-based Lottie declared that she liked to bake while listening to viking metal, as Sabaton played over the top (yes, we know that Sabaton aren’t strictly ‘viking metal’, but now isn’t the time to argue).

Lottie “likes to unwind from her job as a pantomime producer by listening to Viking metal whilst baking” #GBBO pic.twitter.com/BPKIv3v7PESeptember 22, 2020

i love how british wlws are all the same we heard “pantomime producer” and “viking metal” and decided lottie should win #GBBOSeptember 22, 2020

Cant stop thinking about how many people will now be googling “viking metal” #GBBOSeptember 22, 2020

Though as somebody pointed out, Lottie missed a trick in the showstopper round…

Imagine my disappointment when that girl into Viking Metal brought out a skull mold and didn’t make Eddie the Head #gbbo#YeahImBackOnTwitterSeptember 22, 2020

We don’t know about you, but we’re definitely #TeamLottie when it comes to this year’s Bake Off.

Now, where did we put the self-raising flour and mold of Lemmy’s head…

Louder – The Great British Bake Off went full on ROCK last night, and Twitter had a meltdown
Author:
Go to Source
September 23, 2020